'You are only allowed one overdose:' sign temporarily posted inside Massachusetts Burger King 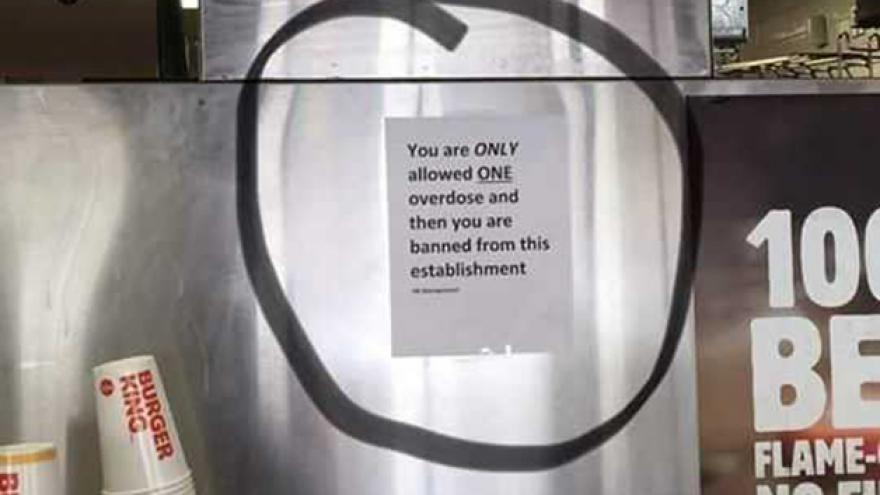 WORCESTER (CBS) – A sign in a Worcester Burger King telling customers they will be banned for overdosing inside the restaurant has been taken down.

Worcester police confirmed that the sign behind the counter was removed. It read: “You are ONLY allowed ONE overdose and then you are banned from this establishment.”

Police said they met with the manager of the Burger King on Madison Street near Kelley Square to talk about how they could help.

“We are in the midst of an opioid crisis and signs like this don’t help,” said AdCare’s Georganna Koppermann. “I think this sign really is a result of the stigma around addiction.”

She also said addicts tend to use public bathrooms and customers admit it is a problem.

“It’s common knowledge, people do use those restrooms to do that sort of thing. There have been overdoses in there,” said one customer.

A report on MassLive.com notes there were nine overdose incidents at the location between September 2016 and September 2017.

Burger King said in a statement to WBZ-TV that the situation is being investigated.

“The actions of this Team Member were an isolated incident and do not reflect the Burger King brand values or the values of the Franchisee, who independently owns and operates this restaurant,” Burger King said. “The Franchisee is investigating this incident thoroughly and will take the actions they believe are appropriate.”