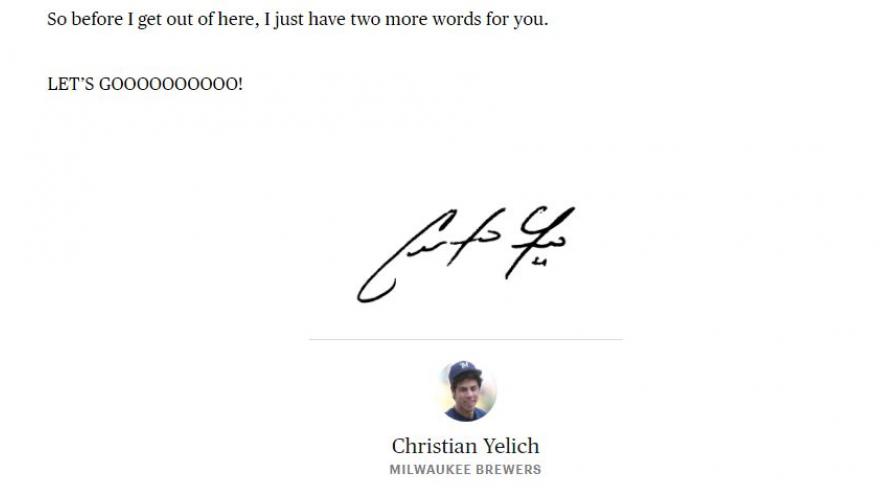 MILWAUKEE (CBS 58) -- With just four more games to go in the regular season, Christian Yelich has penned a letter in The Players' Tribune talking about his time with the Brewers from the day he got traded to now. And he has a plea for Brewers fans.

Yelich who has been at the top of the NL MVP gossip the last few weeks, says that Lorenzo Cain is more deserving, "Maybe I should be talking about myself here, but I don’t know … that’s just not me."

Yelich says "Lo" has a spirit and energy that rubs off on everyone who plays with him. Especially that heads-up play back in June where Yelich got into a pickle and Cain's smart baserunning kept everybody safe.

After making a case for Cain, Yelich discusses his start in the Brewers franchise. He had never been to Milwaukee but had this to say, "It’s pretty ridiculous how nice people are in Milwaukee. It’s like you’re a member of everyone’s family or something."

Before the season even started, Yelich was invited to fly to Milwaukee for fanfest with owner Mark Attanasio and Ryan Braun. When Yelich got on the plane he found out they were going to stop in Arizona to pick up Bob Uecker and Robin Yount.

It was like a Brewers legends trip, and I was somehow lucky enough to be invited.

When it comes to games, Yelich said his favorite are those against the Cubs, "That sort of rivalry is something I hadn’t really experienced before in my career. It really is just two passionate fan bases that don’t like each other a whole lot. And you can feel that tension in the air."

He said he actually likes playing the Cubs more at Wrigley Field where the fans are really hostile.

"When you go in there and rally together as a team — like we did in that last series at Wrigley a few weeks ago — it’s just the best part of playing baseball. And those games will stick with me for a while."

Despite how great the season has been for the Brewers and for Yelich personally, he says they aren't done yet. He asks Brewers fans to be loud, "Like, beyond loud."

And I guess that isn’t really much of a favor at all considering that you guys already do that anyway. But you know what I mean — make it even LOUDER than normal. Don’t hold anything back. And then, you know, we’ll feed off that energy and, well.… Let’s just see what happens, Milwaukee.
Share this article: