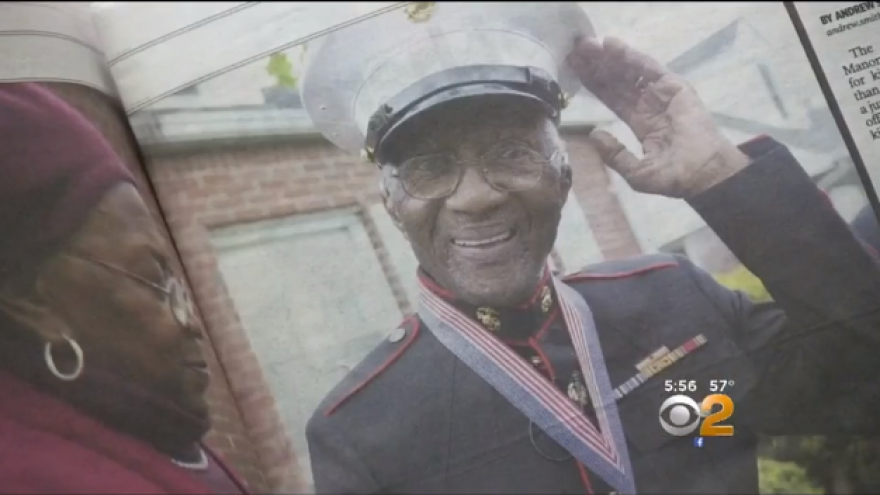 HEMPSTEAD, N.Y. (CBSNewYork) — A Long Island veteran has gotten his due seven decades after he risked his life for his country.

As CBS2’s Hazel Sanchez reports, the Nassau County man finally received the recognition and respect he was once denied because of segregation.

Part of 91-year-old Vincent Long’s daily routine is to sit in his favorite chair and read the newspaper. Only this time, he was the news.

“When I opened it, I was surprised. It was shocking,” Long said.

Long made headlines because more than 70 years after serving in the U.S. Marine Corps, he is finally able to wear the proud service’s dress blue uniform – something that was not possible due to segregation, even in the military.

“At that time, the prejudice and Jim Crow stuff was very heavy, and the Marine camp was down in the deep south,” he said.

Long was part of the first all-black U.S. Marine Corps unit to see combat in World War II. They were called the Montfort Point Marines and they helped liberate islands in the South Pacific being held by the Japanese.

He was honorably discharged and awarded several medals, but not the dress blues he longed to wear.

“What was told to us: Only a corporal and up would get the blues,” he said.

But thanks to some veterans advocates, Long received his very own tailor made uniform this week.

The proud Marine was fussy about making sure everything fit right but said he likes what he sees in the mirror.

After the war, the Brooklyn native married and moved to Long Island where he and his wife Lenora raised two sons.

His longtime Hempstead neighbors are thrilled that justice has been done.

“Very happy for him. I think it’s well overdue time, should have been done a long time ago,” one neighbor said.

Long said he’ll save the dress blues for just the right occasion.

He also said he’d like to thank the veterans group Honor Flight and the retired Marine colonel who helped him get those fine looking dress blues.