Wounded train attack hero played dead to survive; another to get Army medal 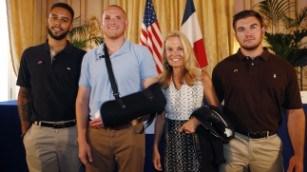 When Mark Moogalian saw the gunman on the train, he was the first to rush him and tried to wrest an assault rifle from his grip.

The two men struggled, and Moogalian was shot in the neck. The French-American collapsed to the floor, bleeding heavily.

\"I really thought he was going to die,\" said his wife, Isabelle Risacher Moogalian.

In an exclusive TV interview, she told CNN her husband played dead to avoid getting shot again.

Mark Moogalian was one of five passengers on the Amsterdam-to-Paris train who tried to disarm the gunman, who wielded enough weaponry to kill everyone on board.

But no one died, thanks to four other men who helped subdue the assailant Friday.

Moogalian is recovering at a hospital in France and could be released from the emergency room Wednesday, his wife said.

Once he's recovered, he will be rewarded with the Legion of Honor, France's highest recognition.

The four other men who helped bring down the gunman have already received the Legion of Honor:Briton Chris Norman and Americans Anthony Sadler, Spencer Stone and Alek Skarlatos.

Skarlatos, a specialist with the Oregon National Guard, will receive the Soldier's Medal, the U.S. Army's highest award for acts of heroism not involving actual conflict with an enemy.