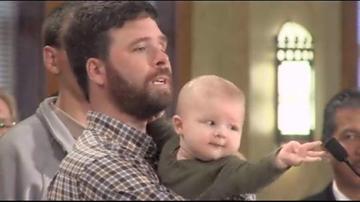 MILWAUKEE-What do you say to a man who lost an eye and his career in the line of the duty?

No words seem adequate, but on Monday, the Milwaukee Common Council wanted to try.

\"You have already honored yourself with your conduct and service to community,\" Alderman Terry Witkowski declared as officer Graham Kunisch received a special resolution marking his retirement from the Milwaukee Police Department.

It marks the end of a long struggle to come back from his encounter with a mentally ill man armed with an illegally purchased handgun.

Anyone who was around June 9, 2009 can recall that afternoon in Walker's Point.

Kunisch and his partner Bryan Norberg wanted to question a suspicious man but rarely got any words out.

The man pulled out a gun and shot them both in the face at point blank range.

\"Graham sadly has had to retire because of his wounds.,\" began Police Chief Ed Flynn, \"But perhaps not entirely sadly.  Because as I see him standing there with his beautiful son in his arms, I have a feeling that for once we can guarantee a happy ending.\"

Kunisch said he only hoped other officers still serving would receive such support.

\"There's been people serving longer than I,\" Kunisch began, \" that have sacrificed every day not being with their families.  So, don't forget about those officers as well. Thank you.\"

Kunisch and Norberg both returned to patrol work after recovering from their gunshot wounds, before Kunisch made the decision to leave for good a couple of months ago.

Norberg, who took a bullet to the jaw that day, is now a motorcycle officer.

Their teen assailant is serving an 80 year sentence.

The man who sold him the gun illegally was given a two year sentence.