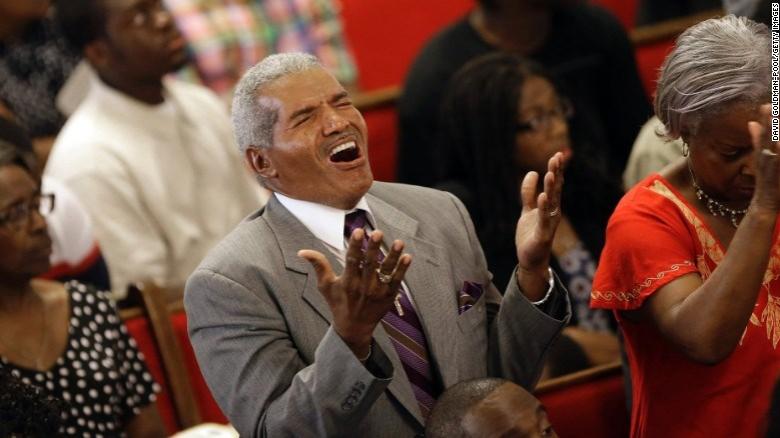 (CNN)The site of a horrific mass killing became a house of worship again.

\"The doors of the church are open,\" declared the Rev. Norvel Goff during prayers. \"No evildoer, no demon in hell or on Earth can close the doors of God's church,\" he proclaimed.

One of the victims was the church's pastor, the Rev. Clementa Pinckney. His seat behind the podium was shrouded in black cloth and uniformed police officers were present in the side aisles.

Overcoming evil with faith in God was a theme throughout the service.

\"It's by faith that we are standing here and sitting here,\" Goff said.

\"Lots of folks expected us to do something strange and break out in a riot. Well, they just don't know us,\" he said as the congregation stood and cheered.

Goff thanked the people of Charleston and South Carolina.

\"We have shown the world how we as a group of people we can come together and pray and work out things that need to be worked out.\"

Right now, he said, the focus needs to be on the grieving families of the nine victims. \"There is a time and place for everything,\" he said.

But Goff did call for action \"Let's not get it twisted. We're going to pursue justice, we're going to be vigilant and we're going to hold our elected officials accountable to do the right thing,\" he said. \"The blood of the Mother Emanuel Nine requires us to work until not only justice is served in this case, but for those who are still living on the margin of life.\"

Goff thanked Gov. Nikki Haley, who was present at the service, and everyone who sent condolences, brought flowers and made donations. He also thanked the FBI and local police.

\"And finally I want to say thank you to law enforcement. I have no problem in doing that. I want to thank them,\" he said.

U.S. Sen. Tim Scott and the mayors of Charleston and North Charleston were also among the worshippers.

Outside the church, where a makeshift memorial covers the entire sidewalk, crowds gathered in the street and listened to the service through loudspeakers.

At 10 a.m., churches around Charleston -- nicknamed the Holy City because it has so many houses of worship -- rang their bells in solidarity with Emanuel AME.

The bell at St. Matthew's Lutheran Church rang 81 times -- 9 times for each victim.

On Sunday night, a unity chain will be held on the 13,200-foot Arthur Ravenel Jr. Bridge. Organizers hope to attract enough people to hold hands and stretch from Charleston to the town of Mount Pleasant on the other side of the Cooper River.

\"When something this horrendous happens this close to home, you are compelled to do something,\" event coordinator Dorsey Fairbairn said on Facebook.

Two law enforcement officials have said Dylann Roof of Lexington, South Carolina, admitted to shooting and killing the people he'd sat with for Bible study at the historically black church.

Roof, 21, is white, and all the victims were black. He told investigators he did it to start a race war, according to one of the officials.

The church area remained a crime scene, and thus off limits to church members, until Charleston police released it Saturday.

On Friday, Roof appeared at a bond hearing. Families of the victims addressed him and said they forgave him.

That message was echoed by Arthur Hurd, husband of victim Cynthia Hurd. He's in the Merchant Marine and arrived in Charleston on Saturday.

\"This is all surreal, but what I can say to that young man is that in time I will forgive you,\" Hurd told CNN affiliate WCIV.

\"I won't move past this, but I will forgive you. But I hope for the rest of your life, however long or short that may be, you stop and play that tape over and over and over again in your head and see the sheer terror and pain you put purely innocent people through. ...\"

People angry about the killings took to the streets Saturday.

In Charleston, hundreds joined the March for Black Lives.

The group began the march in total silence, walking to Emanuel AME Church from a nearby park, and stopped outside the church to lay flowers at the makeshift memorial.

Once marchers passed the church, the group filled Charleston's iconic King Street, usually packed with tourists this time of year. Many carried signs of support for the victims of the Charleston shooting and the black community: \"STILL WE RISE,\" \"Hand in Hand,\" \"Do the right thing,\" \"Black Lives Matter.\"

The march ended with a rally outside the historic Daughters of the Confederacy building.

\"That terrorist did not win. He wanted to invoke terror and fear in our community, but we are not for that,\" an organizer said to the crowd. \"We are standing up together, arm in arm. ... We will not bow down, but we will stand up.\"

Despite the sweltering heat, a large crowd filled the front grounds of the South Carolina Capitol in Columbia calling for the Confederate flag to be removed.

\"Take it down, take it down,\" chanted the crowd, filled with people of all races and ages holding signs.

Organizers of the event, the South Carolina Progressive Network, estimated between 1,500 and 1,700 people attended.

Investigators are looking at a website featuring a racist manifesto that mentions Charleston as the \"historic\" target of an attack and displays images of Roof.

The 2,000-word text explains the writer's philosophy of white superiority, saying the Trayvon Martin case \"truly awakened me\" and that \"I chose Charleston because it is most historic city in my state, and at one time had the highest ratio of blacks to Whites in the country.\"

Motive has become the biggest question as state and federal investigators work on the case -- and statements and photos on the website match what investigators have determined so far.

Martin's parents, Sybrina Fulton and Tracy Martin, addressed the gunman's assertion. Their son was killed by in 2012 by a neighborhood watch volunteer who was acquitted.

\"The Trayvon Martin movement was not created to incite hate or further racial divide, but rather birthed to raise awareness to the social injustices that exist across America with regards to senseless gun violence against our young black and brown boys; the movement also focuses on the growing disparities in the lack of prosecution of the actual perpetrators,\" they said in a statement.