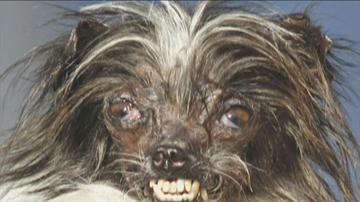 PETALUMA, Calif. (CBS NEWS) - After some fierce competition, a winner was crowned in the \"World's Ugliest Dog\" contest at the Sonoma-Marin Fair in Petaluma.

Peanut, who is from Greenville, North Carolina is a shelter rescue, a victim of abuse who was burned in a fire. The two-year-old was in an animal shelter for nine months before he found a home.

\"He doesn't have lips anymore. His eyelids are also gone, and so he can't close his eyes so therefore his eyes water. The tears drain into his nose and so he has nice little snot bubbles because of it. So it's great, that adds to his character,\" Holly Chandler, Peanut's owner told CBS San Francisco.

\"He's my baby. I guess I don't see him every day as being that ugly. But I guess the judges thought so,\" Chandler said.

Dog owners have traveled from North Carolina, Georgia and Florida to compete.

The winners are chosen by judges at the fair. A popular online vote held before the competition is just for fun, because the results can too easily be skewed, Spencer said.

One of the criteria the judges consider is the pooch's personality.

The judges were Brian Sobel, a member of the fair board, San Francisco Giants' in-game television reporter Amy Gutierrez, and television and film celebrity Cameron Mathison of Good Morning America and Dancing With the Stars.