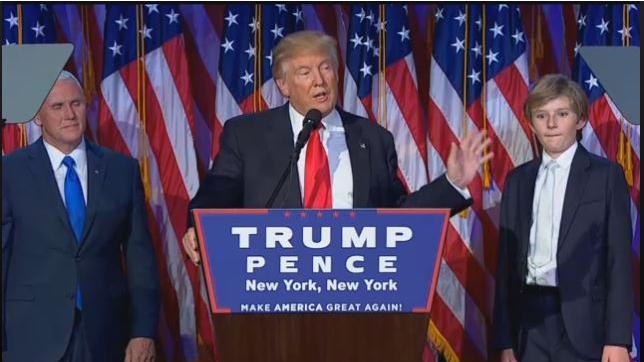 (AP) Palestinian President Mahmoud Abbas says in a statement that he "congratulates the elected American president, Donald Trump, and hopes that peace will be achieved during his term."

An Abbas aide, Saeb Erekat, said Wednesday he doesn't expect U.S. positions on the Israeli-Palestinian conflict to change under Trump.

Erekat said the Republican and Democratic parties are both committed to a two-state solution of the conflict and "I think this will not change with the coming administration."

The Palestinians want to establish a state in the West Bank, Gaza Strip and east Jerusalem, lands Israel captured in 1967. Gaps between Abbas and Israel's hawkish leader on any border deal remain wide.

Trump has proposed moving the U.S. Embassy to Jerusalem, even though the U.S. has not recognized Israel's annexation of parts of the city.

In a brief statement Wednesday, the Kremlin said Putin expressed "his hope to work together for removing Russian-American relations from their crisis state."

Putin also said he has "confidence that building a constructive dialogue between Moscow and Washington that is based on principles of equality, mutual respect and a real accounting each other's positions, in the interests of our peoples and the world community."

A top Palestinian official says he doesn't expect U.S. positions on the Israeli-Palestinian conflict to change under President-elect Donald Trump.

Saeb Erekat, an adviser to Palestinian President Mahmoud Abbas, said the Republican and Democratic parties are both committed to a two-state solution of the conflict.

The Palestinians want to establish a state in the West Bank, Gaza Strip and east Jerusalem, lands Israel captured in 1967. Gaps between Abbas and Israel's hawkish leader on any border deal remain wide.

Erekat said Wednesday that a two-state solution is "in the American national interest, and I think this will not change with the coming administration."

However, Trump has proposed moving the U.S. Embassy to Jerusalem, even though the U.S. has not recognized Israel's annexation of parts of the city.

Russia's lower house of parliament is applauding the election of Donald Trump as the next U.S. president.

Novikov said that "three minutes ago, Hillary Clinton acknowledged her defeat in the U.S. presidential elections and just a second ago, Trump began his speech as president-elect. I congratulate all of you on this."

The chamber, where the pro-Kremlin party holds an overwhelming majority, then broke into applause, the report said.

Turkey's justice minister says a change of presidents in the United States won't make a big difference to the "deep-rooted" relations between the two countries.

Bekiz Bozdag told the state-run Anadolu Agency on Wednesday: "in essence our relations are relations between two states and we hope that under the new presidential term the Turkish-U.S. relations will be much better. That is our expectation."

"I saw an intense campaign for Hillary Clinton's victory. Artists, sportsmen, all personalities worked for Clinton's victory. But in elections, it is important to embrace the people," Bozdag said. "No one has won elections through newspaper headlines, opinion polls or television (campaigns)."

Wilders, whose Freedom Party is riding high in opinion polls ahead of Dutch elections due in March, calls Trump's win in the presidential election "A historic victory! A revolution."

Looking ahead to the Dutch vote, Wilders finished his tweet: "We also will give our country back to the people of the Netherlands."

Wilders is known for his strident anti-Islam rhetoric and opposition to the Netherlands' European Union membership.

Japan is sending a top official to Washington to try to meet with those who will be responsible for the next White House administration.

Katsuyuki Kawai, a political aide to Prime Minister Shinzo Abe in charge of diplomacy, told reporters after meeting with Abe that he had been instructed to visit Washington as early as next week.

Abe's instruction came when results showed Republican candidate Donald Trump with a clear lead. Chief Cabinet Secretary Yoshihide Suga said it was not because Japan was unprepared for Trump's win.

He said: "We have been preparing so that we can respond to any situation because our stance is that our alliance with the U.S. remains to be the cornerstone of our diplomacy whoever becomes the next president."

According to the Interfax news agency, Zhirinovsky said: "We of course regard with satisfaction that the better candidate of the two presented to the American voters was victorious."

He also said that he hopes the presumed Trump victory means that U.S. Ambassador John Tefft departs. He says, "We hope that this ambassador leaves Russia ... he hates Russia."

Canada and the prospect of Americans moving there appears to have drawn so much online interest that it has knocked out the country's immigration website.

Searches for "move to Canada" and "immigrate to Canada" spiked Tuesday night as election returns favored Republican nominee Donald Trump. "Canada" was a leading U.S. trend on Twitter, with more than 1 million tweets.

While much of the chatter was clearly tongue-in-cheek, the website for Citizenship and Immigration Canada was down at the same time. Agency officials could not be immediately reached for comment.

German Defense Minister Ursula von der Leyen calls the strong vote for Donald Trump "a big shock," and the U.S. elections "a vote against Washington, against the establishment."

Von der Leyen said on German public Television Wednesday that while many questions remain open, "We Europeans obviously know that as partners in the NATO, Donald Trump will naturally ask what 'are you achieving for the alliance,' but we will also ask 'what's your stand toward the alliance.'"

The defense minister said that behind the scenes the German government would try to make contacts on the working level to find out who are the new contact persons.

The first French presidential candidate to comment on the U.S. election was populist, anti-immigrant politician Marine Le Pen, congratulating Trump even before the final results are known.

French Foreign Minister Jean-Marc Ayrault said France would continue to work with the new president whoever wins the final tally, though expressed concern about Trump's lead and said it could hold a cautionary message for Europe.

Ayrault said European politicians should pay attention to the message from Trump voters. "There is a part of our electorate that feels ... abandoned," including people who feel "left behind" by globalization, he said.

He said a Trump victory could bring "more incertitude" to French politics.

Indonesians on social media are questioning why Americans have voted in big numbers for billionaire Donald Trump, who many in the world's most populous Muslim country perceive as intolerant and reactionary.

Twitter, Facebook and chatrooms in instant messaging apps are buzzing with speculation about whether Trump would follow through on campaign rhetoric that included a ban on Muslims entering the U.S.

Some people say that under a Trump administration they fear they'll be prevented from visiting relatives and friends who live in America or traveling there as tourists.

About 100,000 Indonesians live in the United States.

President Joko "Jokowi" Widodo says on national television that his government will work with whoever becomes president.

News of Trump's widening lead hit hard in Cuba, which has spent the last two years negotiating normalization with the United States after more than 50 years of Cold War hostility.

Normalization has set off a tourism boom in Cuba and visits by hundreds of executives from the U.S. and dozens of other nations newly interested in doing business on the island. Trump has promised to reverse Obama's opening with Cuba unless President Raul Castro agrees to more political freedom on the island, a concession considered a virtual impossibility.

Speaking of Cuba's leaders, Communist Party member and noted economist and political scientist Esteban Morales told the Telesur network that "they must be worried because I think this represents a new chapter."

Carlos Alzugaray, a political scientist and retired Cuban diplomat, said a Trump victory could, however, please some hard-liners in the Cuban leadership who worried that Cuba was moving too close to the United States too quickly.

While many Cubans were unaware of the state of the race early Wednesday morning, those watching state-run Telesur or listening to radio updates said they feared that a Trump victory would mean losing the few improvements they had seen in their lives thanks to the post-detente tourism boom.

"The little we've advanced, if he reverses it, it hurts us," taxi driver Oriel Iglesias Garcia said. "You know tourism will go down. If Donald Trump wins and turns everything back it's really bad for us."

A couple of Chinese participants at a U.S. Embassy event in Beijing say they'd welcome a Trump presidency, while another says he thinks the Republican candidate projects a flawed image of the United States.

Blogger Wang Yiming says he hopes Trump will win because the Republican Party has been typically more willing to demonstrate American leadership globally, and he hoped a Republican president would do more to encourage freedom of speech in China.

Wang says: "I think America has stagnated and Trump represents justice, the rule of law and personal freedom."

Lou Bin, a 43-year-old academic at a university in Beijing, says he didn't support either candidate but Trump didn't come across as much of a "gentleman." He says: "As president you want someone who represents the country's image."

Australian Foreign Minister Julie Bishop says at this stage, it would appear that Donald Trump is most likely to claim the presidency.

Bishop told reporters in Canberra, Australia's capital, that her government is ready to work with whomever the American people, "in their wisdom," choose to be their president.

She says a U.S. presidential election is always a momentous occasion, and in this instance, "it has been a particularly bruising, divisive and hard-fought campaign."

She calls the U.S. "our major security ally" and the largest foreign direct investor and the second-largest trading partner.

She says: "The United States is also the guarantor and defender of the rules-based international order that has underpinned so much of our economic and security issues. And interests."