Woman Says Boyfriend Tried to Rip out Her Tongue 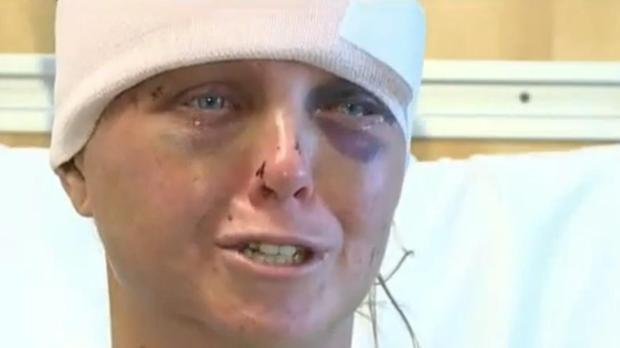 (CBSNews) INDIANAPOLIS, Ind. -- An Indiana woman says her former boyfriend brutally attacked her inside their Indianapolis home, trying to rip out her tongue with his hands as he beat her unconscious, reports CBS affiliate WTTV.

“He succeeded, half way. He got the right side halfway. He got it halfway ripped out,” 25-year-old Carleigh Hager told the station in an interview at a hospital where she remains in recovery.

A bandage wrapped around her head, with visible bruises and bite marks, Hager has had her tongue reconstructed since the Saturday attack, but still requires further medical treatment.

Hager says she had just returned home from a wedding she attended with her Ryan Cameron, 26, her boyfriend at the time, and other friends, when an argument between the couple turned physical.

“He locked our friends outside of our house and ran to the bathroom and locked us in the bathroom,” Hager said.

Hager says she was then beaten until she passed out. As the alleged attack went on, her friends called police. Catherine O’Connor, CEO of the Julian Center, a domestic violence victims’ resource group, says Hagers friends may have saved her life.

“Those people intervened. They did what they could to stop the situation and they called the police to make sure something happened to protect this victim and that’s exactly what should happen,” O’Connor said.

Hager says after a loving, two-year relationship the mental, verbal and physical abuse started about a month ago. The 25-year-old nursing assistant says she wants this story to warn others not to ignore the warning signs of domestic abuse.

Cameron is in the Marion County Jail charged with multiple felonies including aggravated battery.

Hager’s family has set up a GoFundMe account to help cover her medical expenses.