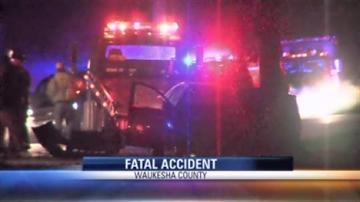 WAUKESHA -- A driver killed in a fatal car vs. tree crash in Waukesha missed a curve on the road just before the crash, according to investigators.

A 37-year-old Helenville woman was pronounced dead at the scene.

The car was going northbound on Merrill Hills Road and after cresting a hill, it appears the driver milssed a slight right curve and crossed the southbound lane before striking a large tree, officials said.

It's unknown if there were any other contributing factors in the crash.