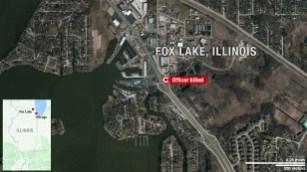 An Illinois woman sent 100 officers scrambling overnight after saying she saw two men who fit the description of the cop killers police have been looking for.

But after hours of searching, police said, they discovered she made the whole story up.

\"It's very disappointing because our resources could have been used somewhere else,\" Lake County Sheriff's Detective Christopher Covelli said early Thursday morning.

Law enforcement officers have been searching nonstop for three men suspected of killing Fox Lake police Lt. Joe Gliniewicz on Tuesday. The suspects have been described only as two white men and one black man.

On Wednesday night, Kristin B. Kiefer, 30, called police and said she was driving and pulled over near a cornfield because she was having car trouble, Covelli said.

Kiefer told officers a white man and a black man tried to get in her car, Covelli said. She said when she picked up her phone to call police, the two men fled into the cornfield.

More than 100 federal, state and local law enforcement officers descended on the area overnight. Eleven K9 officers and three aircraft also responded to the tip.But Kiefer later admitted she fabricated the story because she was looking for attention, Covelli said.

She was charged with two counts of disorderly conduct -- one felony, one misdemeanor -- due to the false report, the detective said.

Kiefer was being held Thursday morning at the Lake County jail and is scheduled to have a bond hearing later in the day.