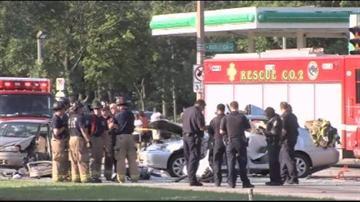 MILWAUKEE-Two people died in a crash Thursday night on Milwaukee's north side.

Three others were hurt, including the driver who's been arrested on possible charged of homicide by negligent use of a vehicle.

At 5:27 p.m., a District 7 police sergeant was flagged down and responded to a tragic four-car traffic accident at Sherman and Burleigh. A 62-year-old woman driving a small SUV eastbound on Burleigh ran a red light at Sherman Blvd.  The SUV struck another vehicle traveling south on Sherman, killing the two female occupants and involving two other vehicles in the crash. The deceased victims are the 52-year-old operator and her 45-year-old passenger.