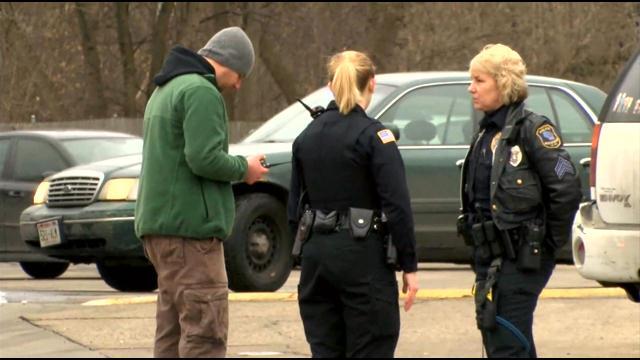 A wild scene played out at the border of Milwaukee and Whitefish Bay Monday afternoon when a group of robbery suspects crashed their vehicle during a police pursuit.

A witness and police say a white SUV going north on Wilson at a high rate of speed slammed into a red Ford focus near the intersection of Santa Monica and Hampton.

Police caught one almost immediately. The other two ran away.

That pursuit went through a nearby yard where a man, who appeared to be a regular citizen with a handgun, tried to apprehend one of the suspects.

\"There's a truck that pulls up in front of my house, a man has a gun pointed and he's pointing it at (the suspect),\" resident Heidi Stein told CBS 58's Bill Walsh.

CBS 58 reached out to Milwaukee Police to find out if the armed person was a plain clothes or undercover officer. As of 10:00 p.m. there had been no clarification from authorities.

Milwaukee Police confirm that District Seven officers pursued the SUV shortly after the suspects robbed a 16-year-old Milwaukee girl of her cell phone in the 3000 block of N. 38th Street at about 2:45 p.m.

The 2003 GMC Envoy, reported stolen in Milwaukee on January 16, crashed into another vehicle in the 4700 block of N. Santa Monica.

Two juvenile suspects and one adult suspect were arrested.  Milwaukee Police have since corrected their earlier alert that a fourth suspect was being sought.

The driver of the vehicle struck by the stolen car was conveyed to a local hospital for treatment of non-life threatening injuries.

Whitefish Bay Police also sent out its own statement that read in part:

\"As always, please call the WFB Police Department to report any suspicious activity.\"