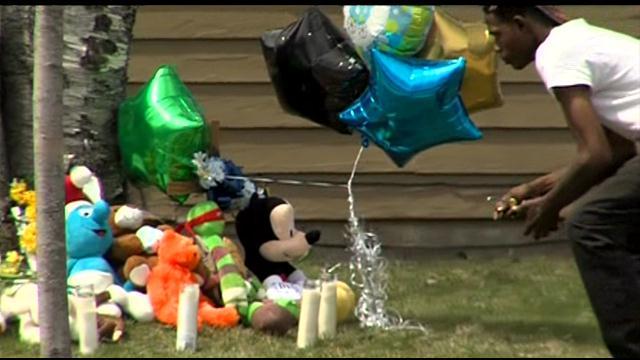 A witness to murder: a man tells us he saw the tragic accident that ended a two-year-old boy's life over the weekend when he was struck and killed on Milwaukee's north side.

Omar Jones watched in horror as two others were gunned down in retaliation.

\"He ran him over and dragged him for a good feet or two. He told him I'm sorry, I'm sorry call an ambulance, the paramedics and the man came out and said no need for that you just signed your death certificate, and started shooting,\" said Omar Jones, describing what happened after 40 year old Archie Brown accidentally hit and killed 2 year old Diamani Terry with his car.

Jones was outside working on the yard when he heard the commotion.

\"I heard a car come to a screeching halt and I heard a bunch of people yelling, \" said Jones.

We now know  what he heard was Archie Brown running over Diamani Terry. Neighbors say the two-year-old was at a party with his 15-year-old brother, Rasheed Chiles.

Jones told us Rasheed was leaving a home headed to the basketball court across the street. His little brother Diamani was following him and tripped on this curb, landing flat in the street. And that's where Archie Brown hit him.

Police say the suspect who is not yet named shot and killed both Brown and Chiles.

\"The man just dropped to the ground. He was begging for his life and he (the suspect) showed no mercy. He just kept shooting,\" said Jones.

Other neighbors tell us the suspect shot Chiles because he didn't do a good enough job of watching his brother.

\"But I don't think that the 15-year-old even acknowledged that they were trying to follow behind him,\" said Jones.

Milwaukee police say they know who that man is and they're coming for him.

\"We've identified a suspect if we have significant problem apprehending him we'll certainly share information but we're in the process of looking for him now,\" said Jones.