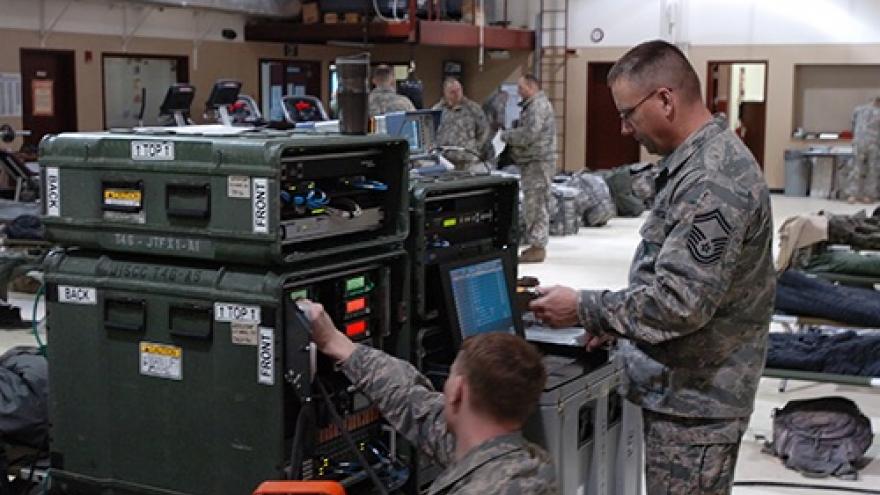 PUERTO RICO (CBS 58) -- A team of six Airmen from the 115th Fighter Wing that deployed to Puerto Rico in the aftermath of Hurricane Maria is the latest in the Wisconsin National Guard's ongoing response to the hurricanes that have affected the United States over the past month.

"The Airmen who volunteer to be part of the JISCC team are highly trained experts of cyber systems and cyber transport operators who are always ready to rapidly deploy," said 115th Fighter Wing JISCC member Tech. Sgt. Jaime Denner. "It provides incident site communications support for areas with no network, telephone or radio interoperability to the responding military and non-military emergency responders for both natural and man-made disasters."

According to Denner, the overall mission of the JISCC is to provide satellite communications, radio interoperability of multiple commercial and tactical radio systems delivering high-bandwidth connectivity even where the infrastructure is severely damaged.

The National Guard developed the JISCC concept after learning valuable lessons from the response to Hurricane Katrina in 2005, which exposed the need for a more robust communications capability in the wake of major disasters. The 115th Fighter Wing implemented its JISCC five years ago and members of the team have been training for a real-world opportunity to respond ever since.

"Since obtaining the JISCC mission, we have been mainly focused on training exercises where we were a small, but important piece of a bigger, large scale response," Denner said. "We've yet to see a true short-notice emergency response or what's more, a standalone response just for the JISCC. It's exciting to now be executing what we've learned to support this real world event."

Maj. Keith Hofkens, the 115th Fighter Wing Communications Squadron commander said the Airmen were excited to have the opportunity to serve fellow Americans in their time of need.

"The exciting thing about domestic operations support (DOMOPS), like what we are currently doing with the Virgin Islands, Puerto Rico, and even locally in Wisconsin after a tornado or flood, is that it puts our Airmen at the tip of the sword from an operational standpoint," Hofkens said. "To see the smile and excitement on their faces when getting called up for DOMOPS, and what it's providing in a role of support for our neighbors, families and fellow Americans is something special. It's why we joined and continue to put the uniform on."
The teams could be gone as long as 45 days with the possibility of extending, but they are prepared to stay as long as needed fulfilling their role as the nation's first military responder in times of emergency.

The Wisconsin National Guard simultaneously remains ready to fulfill its mission as the primary combat reserve of the Army and Air Force.