Wisconsin is one of nine states to receive tainted beef 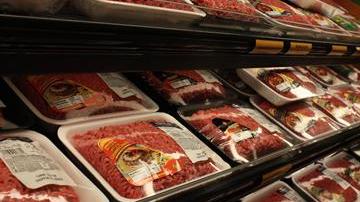 (CNN) -- Check your ground beef before you grill out this Memorial Day weekend. The USDA's Food Safety and Inspection Service says stores in nine states may have received beef contaminated with E. coli O157:H7.

The FSIS announced earlier this week that 1.8 million pounds of ground beef products were being recalled because they could be contaminated. The federal agency has since named five retailers that may have received the tainted products.

They are as follows:

A spokesperson for the U.S. Department of Agriculture said the meat is in the process of being removed from store shelves. But consumers should return or throw out meat that has the code EST.2574B and a production date between March 31 and April 18, 2014.

The ground beef is sold under a variety of labels, according to the USDA, but comes from Wolverine Packing Company in Detroit.

\"While none of the Wolverine Packing product has tested positive for the pathogen implicated in this outbreak, the company felt it was prudent to take this voluntary recall action in response to the illnesses and initial outbreak investigation findings,\" Chuck Sanger, a spokesman for Wolverine Packing, said in a statement.

Eleven people across four states are suspected to have been sickened by the product, according to the USDA. Ten of those people were sickened after eating at restaurants that received contaminated meat. But federal officials say regulations prohibit them from naming those restaurants.

\"People who were exposed were already exposed, so it doesn't help the public to tell them now that a certain restaurant was associated with these illnesses,\" David Goldman, Assistant Administrator for the Office of Public Health Science at the USDA, told CNN. \"Our job really is to identify product that may still be available.\"

The list of stores released Wednesday is not final, a FSIS spokesperson said. More establishments will be added as the USDA continues its investigation.

The recall was categorized by the FSIS as \"Class I\": a health hazard situation in which there is a reasonable probability that the use of the product will cause serious, adverse health consequences or death.

E. coli is a large group of bacteria that lives in the intestines of people and animals, according to the Centers for Disease Control and Prevention. Certain strains cause gastrointestinal illness in humans, with symptoms such as abdominal pain and diarrhea. An estimated 265,000 infections occur in the United States each year, the CDC says.

People usually get sick three to four days after ingesting the bacteria and recover on their own. Young children, pregnant women, the elderly and people who have weakened immune systems (like cancer or HIV patients) are at greater risk for severe illness and death.

The best way to avoid getting sick is by washing hands frequently when preparing food, and avoiding cross-contamination by washing cutting boards, counters and utensils with hot, soapy water.

Properly washing hands after using the bathroom and after coming into contact with animals or being in their environments -- anywhere there may be traces of feces -- also helps.

Cooking meats thoroughly to at least 160°F or 70°C kills the bacteria and prevents infection as well. Using a meat thermometer will most accurately help you determine that the food is thoroughly cooked.

FSIS officials said in a press release the agency is continuing to work with state and federal public health partners on the investigation and provide updated information as it becomes available.