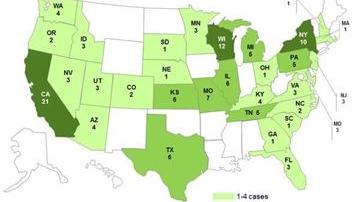 ATLANTA --  Wisconsin is named in a Salmonella Cotham outbreak that has sickened more than 100 people in 31 states, according to the Center for Disease Control and Prevention.

The outbreak is linked to bearded dragons, a popular pet lizard.

In January 2014, the Wisconsin Department of Health Services notified the CDC of a cluster of Salmonella Cotham infections--with a high number of sick patients reporting contact with pet reptiles.

Since 2012, 12 people in Wisconsin have been infected, 10 of whom say they had contact with a pet bearded dragon.

Salmonella have more than 2,500 serotypes, or groups, within its species. The Salmonella Cotham serotype is rare, the CDC says.

Before this outbreak, fewer than 25 Salmonella Cotham infections a year had been reported.

More than half of those infected are children 5 years of age or younger.

About 42 percent of those reported ill have been hospitalized. No deaths have been reported.

California has the highest number of reported cases with 21. Wisconsin follows directly behind with 12.

Exact source yet to be identified

It's not yet clear exactly how and where the outbreak began.

The infections have been linked to bearded dragons purchased in several states.

The CDC says it has partnered with several state health departments and veterinary and agriculture officials to find the source of the bearded dragons linked to the outbreak.

Multiple bearded dragon breeders have been identified that supply lizards to pet stores throughout the country.

Hundreds of people have become ill in multiple rolling Salmonella outbreaks nationwide, with many of those infected being children under 5 years of age.

Salmonella can be spread when reptiles and amphibians come in contact with people's hands and clothing, and germs can also get on cages, aquariums or other housing containers, and in the water the pets live and swim in.

The CDC offers several tips on reptile and amphibian handling, noting that it's crucial for pet owners to wash their hands after handling a reptile or amphibian.

Stay tuned to CBS 58 News for the updates on this outbreak.