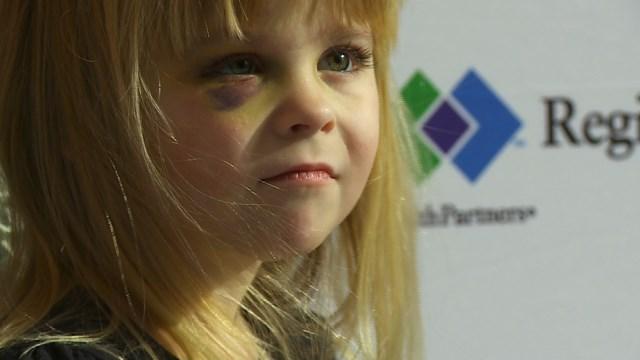 MINNEAPOLIS (WCCO) — A girl from Western Wisconsin is lucky to be alive after a 150-pound box TV fell on her last Friday.

Ahriana Sonnentag, four-year-old, was climbing up a dresser when a TV on top of it tipped over and landed on her.

She was rushed to the Level 1 Trauma Center at Regions and Gillette Children’s hospitals in St. Paul.

Doctors said it is incredible that Ahriana was released only after three days, and she is expected to make a full recovery.

“She wasn’t moving. She wasn’t breathing. I thought she was dead,” Cassandra Sonnentag, Ahriana’s mother, said.

She said just seconds after leaving her daughter to play in a spare bedroom, she heard a loud bang and immediately knew what happened.

“Deep down I knew, mother’s instinct,” Cassandra said. “We knew the TV had come down.”

The TV had landed on Ahriana and knocked her out. She then woke up and started to cry. Her parents rushed her to the Baldwin Area Medical Center. Ahriana stopped breathing at one point.

Paramedics revived her, and she was then airlifted to St. Paul. She had suffered a concussion and a skull fracture.

About 30 kids a day have a TV fall on them in the United States.

“There’s the potential for devastating injuries and people just don’t think about it,” Dr. Michael McGonigal of Regions Hospital said.

The TV likely bounced before landing on Ahriana.

“It was a 150-pound TV, so if that TV hadn’t bounced first and then landed on her, it would have crushed her skull fully,” Cassandra said.

Cassandra and her husband, Nate, say they know their daughter is getting a second chance. They keep a close eye on their kids, which is what makes what happened to Ahriana so scary.

“If you have something like that, just get rid of it. If you are planning on keeping it, make sure it’s secured,” Nate said. “I wouldn’t wish what we had to go through on anybody.”

Doctors say Ahriana’s skull fracture should heal in about six to eight weeks.

She is not expected to have any long-term problems from the accident.