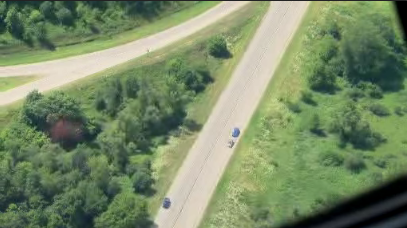 WISCONSIN - An eye from the sky, all across Wisconsin the DOT is monitoring speed and you might not even be aware until you get a ticket. CBS 58's April Dovorany hopped on a plane with a State Patrol Pilot to find out how the program works.

Officials say it's not about tricking drivers or writing speeding tickets. They actually said part of the reason they'd do an interview with us is so that more people are aware that they are being watched and make an effort to drive better so they don't get stopped.

"On the high end, we'll stop about 60 cars, that was my highest ever. But, the average is like 35-40 cars. So we're stopping quite a few cars." Wisconsin State Trooper Bill Lindeman says barring bad weather, one of three DOT planes is up in the air at least once a week. "We're looking for speed of course. Another thing is following too closely and aggressive driving. We tend to work the aircraft in areas where it's hard to work on the ground."

In our area, the OPs are usually held in Kenosha, Fond du Lac, Sheboygan, Walworth, and Waukesha counties. You'll know because they post a sign and you'll also see white marks 660 feet apart. Each time a driver passes one, the pilot hits a switch on the computer. "We know the distance and just a simple calculation on the computer, time and distance and we get a speed."

The pilot then radios down to one of about four troopers on standby and tells them who to stop. "You can pick out a car that's really moving and really easy to see. A trooper on the ground, if he's not focused on the ground, he might miss that car."

It's all paid for by a federal grant. The DOT say it's worth it even with the cost of gas, leasing the planes from the state, and paying for law enforcement to work the ground. They told CBS 58 News that "unofficial data from the pilots and troopers shows the revenue generated more than pays for the operation."

How often is this happening? In 2015 there were 71 traffic enforcement OPS held statewide with 1,867 citations written, the majority for speeding. But, even though they do test the computer twice each mission for accuracy, sometimes dangerous drivers get away. On a recent mission, troopers pulled over more than 50 people, some going nearly 100 miles an hour.

Wisconsin's DOT has been conducting aerial traffic enforcement since 1958. They're not alone either. This is a program that is taking place in about 20 other states.