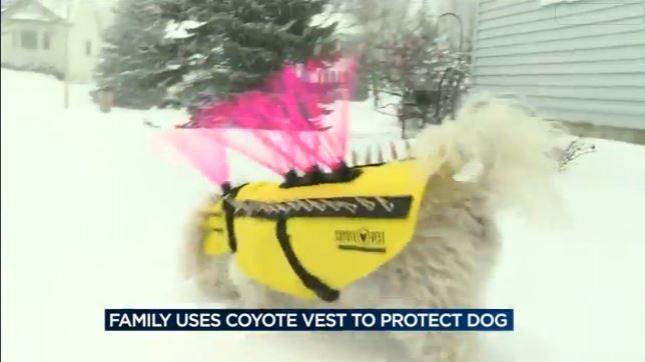 (Channel3000) Madison - Concerns about coyotes in a Madison neighborhood prompted a dog owner to take measures to protect her pet.

Chris Ducommun, who lives in the Maple Grove neighborhood, told News 3 that a friend previously spotted coyotes in her yard, and her daughter nearly struck a coyote with her vehicle on Prairie Road a few weeks ago.

Concerned about the safety of her dog Grace, Ducommun bought a vest from CoyoteVest Pet Body Armor.

According to a description on the company’s website, “A CoyoteVest is like a Kevlar vest that a soldier might wear. It does not protect all of the body or guarantee survival, but it does increase the chances of survival and might be the difference between life or death.”

Ducommun said Grace "moves around in it as if she's not wearing it."

Public health officials recently released an instructional video on how to scare coyotes away from urban neighborhoods.

Coyotes have adapted to urban areas and they may be seen regularly, according to a release from public health officials. When a coyote comes out during the day and it does not move away or acts aggressively toward domestic animals, that means it has become too comfortable in the area.