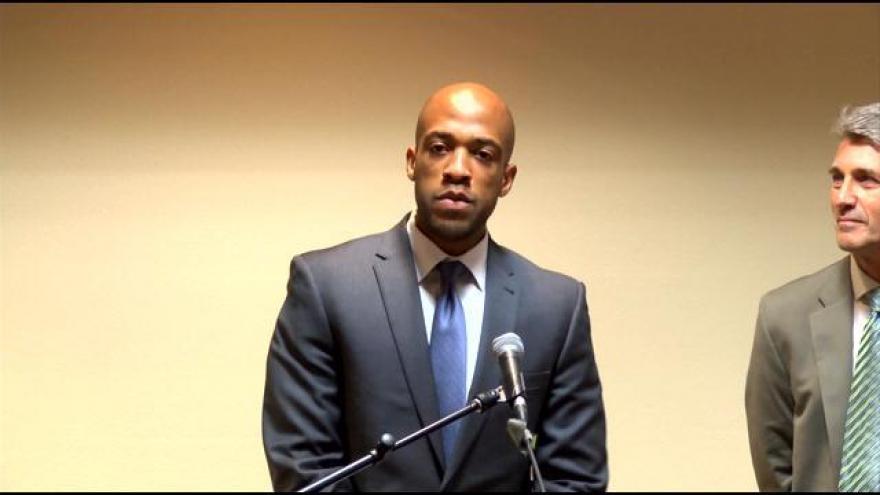 MADISON, Wis. (AP) — Wisconsin Democratic lieutenant governor candidate Mandela Barnes was tagged as the co-host of a lingerie party in 2009 when he was 22, extending an online invitation that joked about "stimulus packages" and used derogatory slang to refer to people who would be turned away.

Barnes, now 31, is Tony Evers' running mate after winning his primary in August. He served in the state Assembly from 2013 to 2017.

"The theme of this 9-year-old party was immature," Barnes said in an email comment Tuesday. "I am committed, as I have been throughout my time in public service, to gender equality, including closing the pay gap, expanding paid family leave, and protecting the rights of women to make their own health care decisions."

In follow up text messages with The Associated Press on Wednesday, Barnes said he didn't create the event or come up with the idea for the party.

"I was tagged as a host of an event on fb," Barnes texted. "People get tagged/added as a co-host all the time."

Barnes also said he didn't remember if he attended the party or not.

The Wisconsin Republican Party alerted The Associated Press to the invitation. Republican Party spokesman Alec Zimmerman said it showed that Barnes' actions "don't match his empty words and promises." He condemned use of the word "ratchet" — slang for a person with no class — in describing women who would be turned away from the party.

"Tony Evers needs to immediately condemn the actions of his running mate because the people of Wisconsin deserve better," Zimmerman said.

Barnes, along with Evers, has made a concerted effort to attract women voters this year as they campaign against Gov. Scott Walker. Evers has been critical of Walker for supporting Brett Kavanaugh's appointment to the Supreme Court, saying he believed the woman who accused Kavanaugh of sexual assault decades ago.

Barnes, at a campaign stop in August, also talked about the importance of women to the campaign.

"What you will have in a Tony Evers, Mandela Barnes administration is one that puts the rights of women forefront, right front and center," Barnes said.

On Tuesday, the Evers campaign launched "Women for Tony" events featuring Evers' wife, former state Rep. Kelda Roys and others who talked about how the Evers-Barnes ticket would be a champion for issues that women and families care about including accessible health care, quality public education and increased opportunity for all.

But the 2009 invitation to the "Pretty in Pink a Vicky Secret Affair" took a different tone. The invitation is unsigned, but Barnes is listed at the top as one of nine hosts. He also commented on the invitation, which was still publicly available on Facebook as of Tuesday afternoon but was deleted after the AP inquired about it.

The invitation refers to past parties, promising that the one scheduled for Sept. 11, 2009, in Whitewater would be "even bigger and better than the last time!!!" The invitation said that 203 people went to the party and 381 were interested.

Cash prizes and a Victoria's Secret gift basket were being offered "for the girl goin' the hardest in her Vicky's!!!" The post also said, "Somebody said its a recession, so if you the baddest, it may be a stimulus package for you!!!"

Referencing men who planned to attend, the invitation told men that security would be there "handin' out free choke slams and sleeper holds!!!" But it goes on to say, "Its a Vicky's Secret party, why would you wanna roll on the ground wit a dud anyway???"

It also says that "All ratchets will be turned away!!! We don't have time for it, it's a Vicky's Party."

Barnes said at the time of the party he was working for the Milwaukee Area Workforce Investment Board.