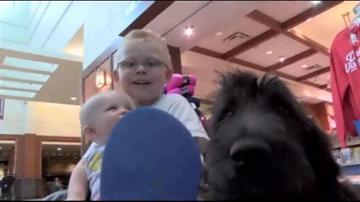 MADISON -- It was a happy scene a Tuesday afternoon at the Dane County Regional Airport.

Dad and baby sister waiting by the elevator for mom and brother, and one very important addition to the family.

That's Hero, a diabetic alert dog who is now trained to watch over Talon and help him keep track of dangerous changes in his blood sugar levels.

4 year old Talon and his mother Samantha spent a few days in California for a final round of training with Hero before bringing him home Tuesday.

Talon has type one diabetes, and a form of autism which makes it almost impossible for him to realize when his blood sugar is spiking or quickly falling.

That's where Hero and his trained nose steps in, and he started doing his job from the moment he met Talon last Friday.

\"She [the trainer] brought Hero out and he just got incredibly hyper and just started freaking out, running around the room, sniffing Talon. Then he started alerting on the trainer and we ended up checking Talon, and he was at 398.\" Said Samantha Zuelsdorf,  Talon’s mother

Samantha says in less than five days, Hero has already alerted her of Talon's abnormal blood sugar levels ten times, including on the plane ride back to Madison.

She says those times would've gone unnoticed in between routine blood checks.

They have a fundraiser on May 24th to try and raise the rest of the money. There's also a link on our site to find out more about their fundraising efforts.