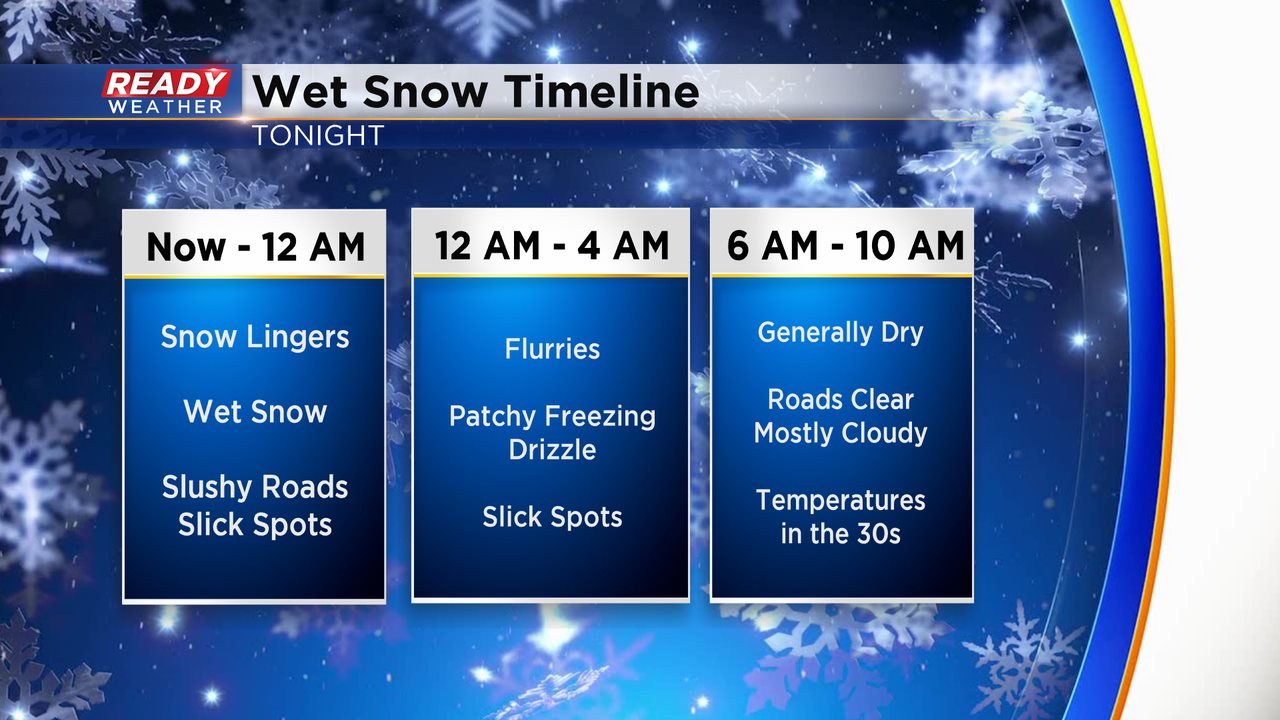 Light snow showers are likely through Midnight.  Many areas have picked up 1" to 2" on grassy areas.  Secondary roads are slick tonight, especially interstate ramps.

Flurries are possible overnight; however, we do expect patchy areas of freezing drizzle.  After 6 am the commute should be in pretty good shape.

The winter weather advisory remains in effect until 1 am.  Light snow continues to fall across the area; however, the intensity has gone down since the afternoon. 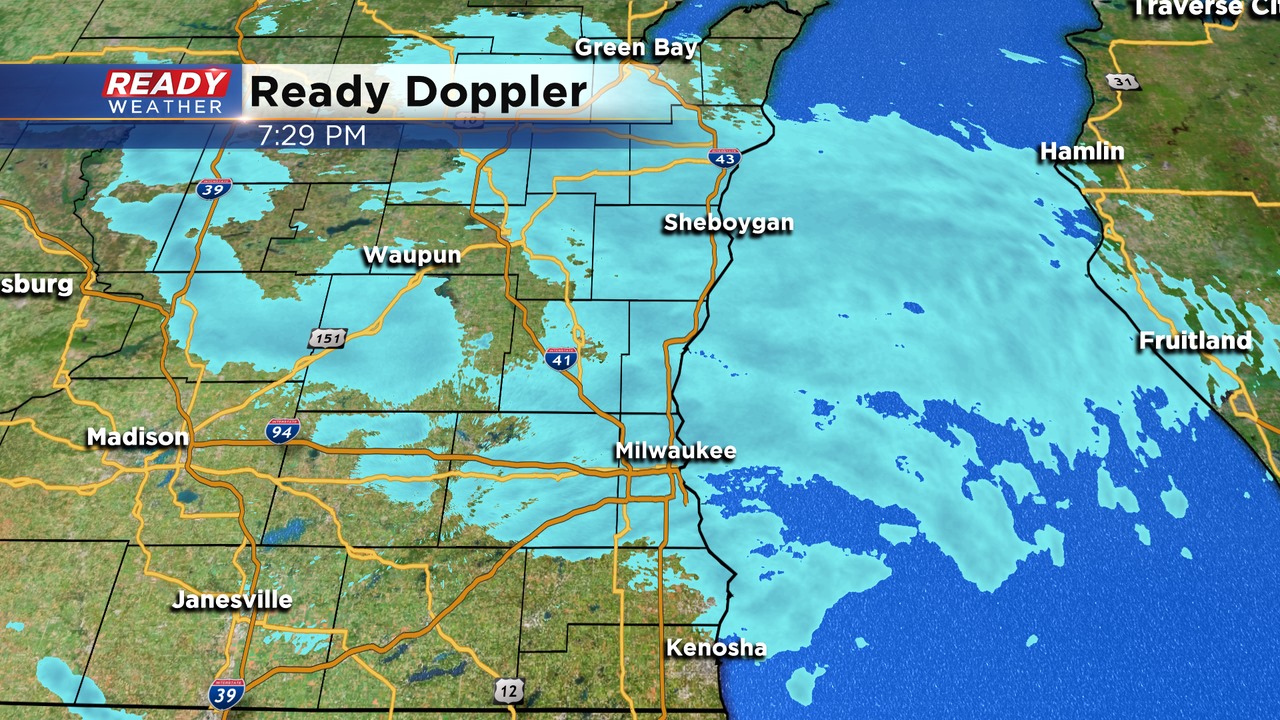 Light snow remains in the forecast through Midnight.  Areas near the lakefront, especially north of Milwaukee, won't pick up on much accumulation.  Most areas will receive a dusting to 1" on grassy areas.

Dry air will help to erode the snow showers and produce some patchy freezing drizzle.  This doesn't appear to be widespread overnight.  It could create some additional slick spots. 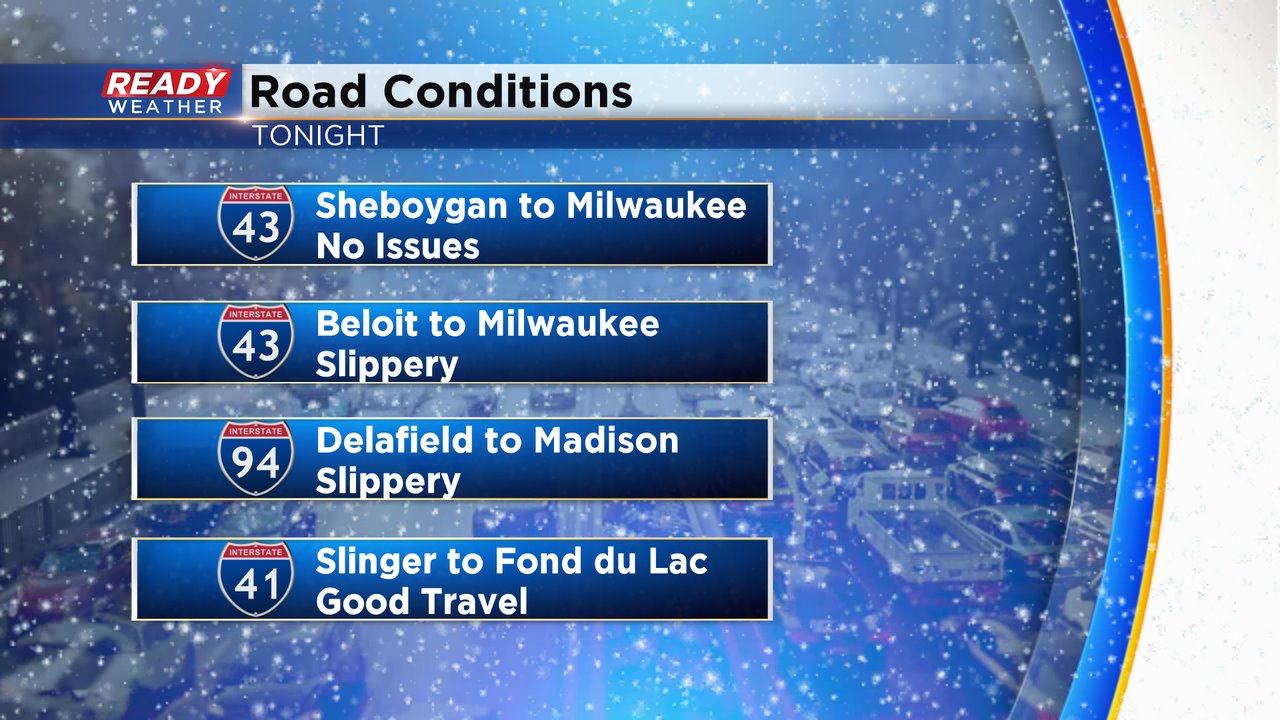 Areas west and south of Milwaukee have picked up snow and it's creating slick spots on the roads.  In addition to the slick roads, low visibility is also an issue within the heavier snow band. 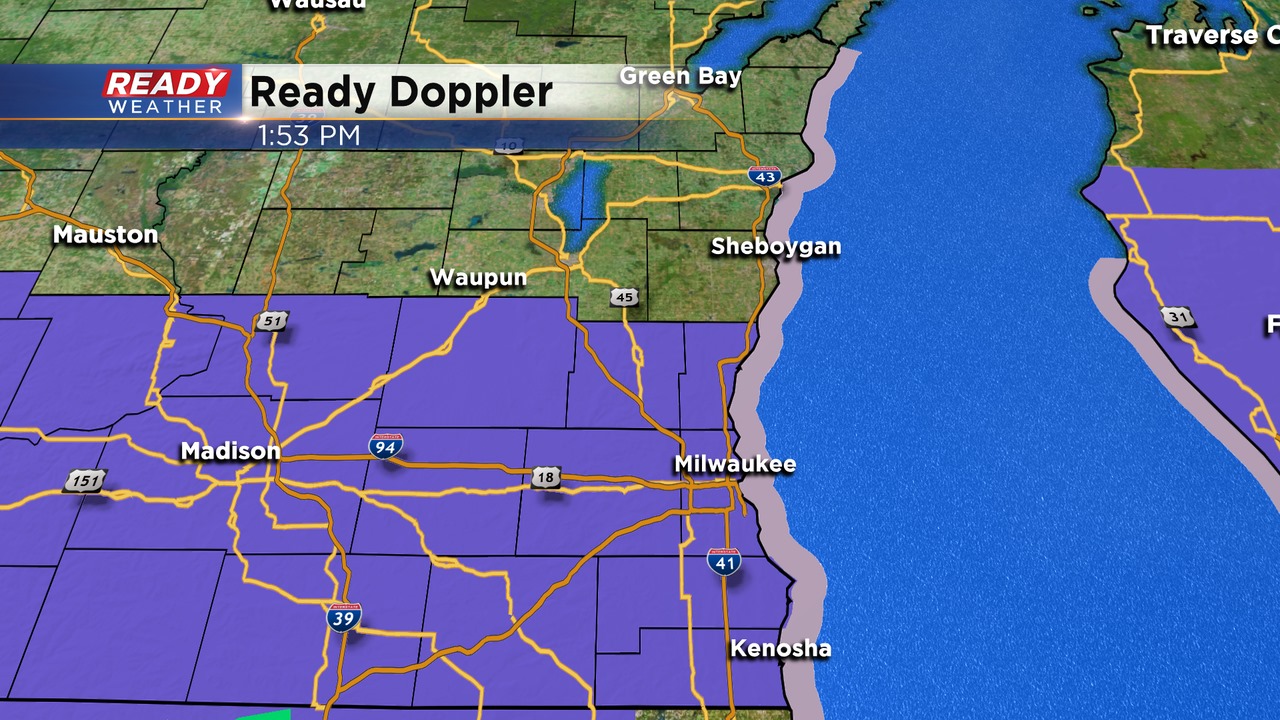 The National Weather Service has issued a winter weather advisory for the majority of the area until 1 am.  Sheboygan and Fond du Lac counties are not included.

Roads will be slushy and slick this evening as a band of moderate snow moves from south to north.  After midnight the snow will end; however, patchy areas of freezing drizzle will develop and create additional slick spots.

Cloudy and windy, but dry over the noon hour. Wind will be a major impact to this storm as snow slowly works in late day. Wind gusts have already been over 30mph in many locations across the viewing area. I've seen winds gusts to about 45mph in places just to our southwest as moderate snow is in progress there. Be prepared for quickly dropping visibilities as snow works in later today.

The timing of the snow will vary depending on your location. As it rolls up from the south, places like the greater Milwaukee area can expect it overhead by 5 p.m. 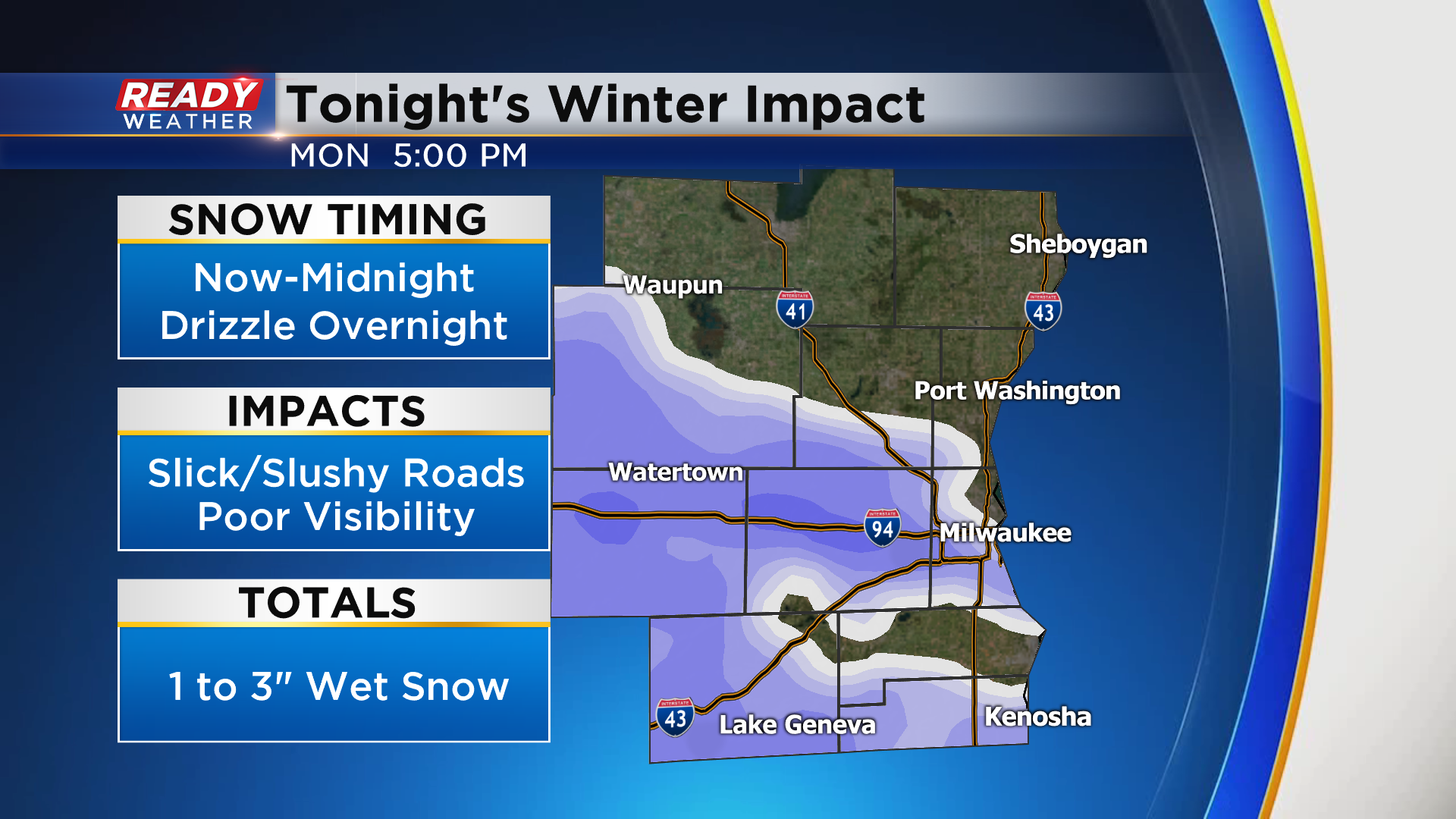 There may also be a touch of sleet mixing in at the onset of this system, but that should quickly transition to all snow for the majority of the event. Due to the timing over the main commute home, there is a chance the National Weather Service could expand the Winter Weather Advisory (which currently sits just outside the viewing area) north and east. Any updates will be sent your way via our blog, social media pages and on the evening newscasts. 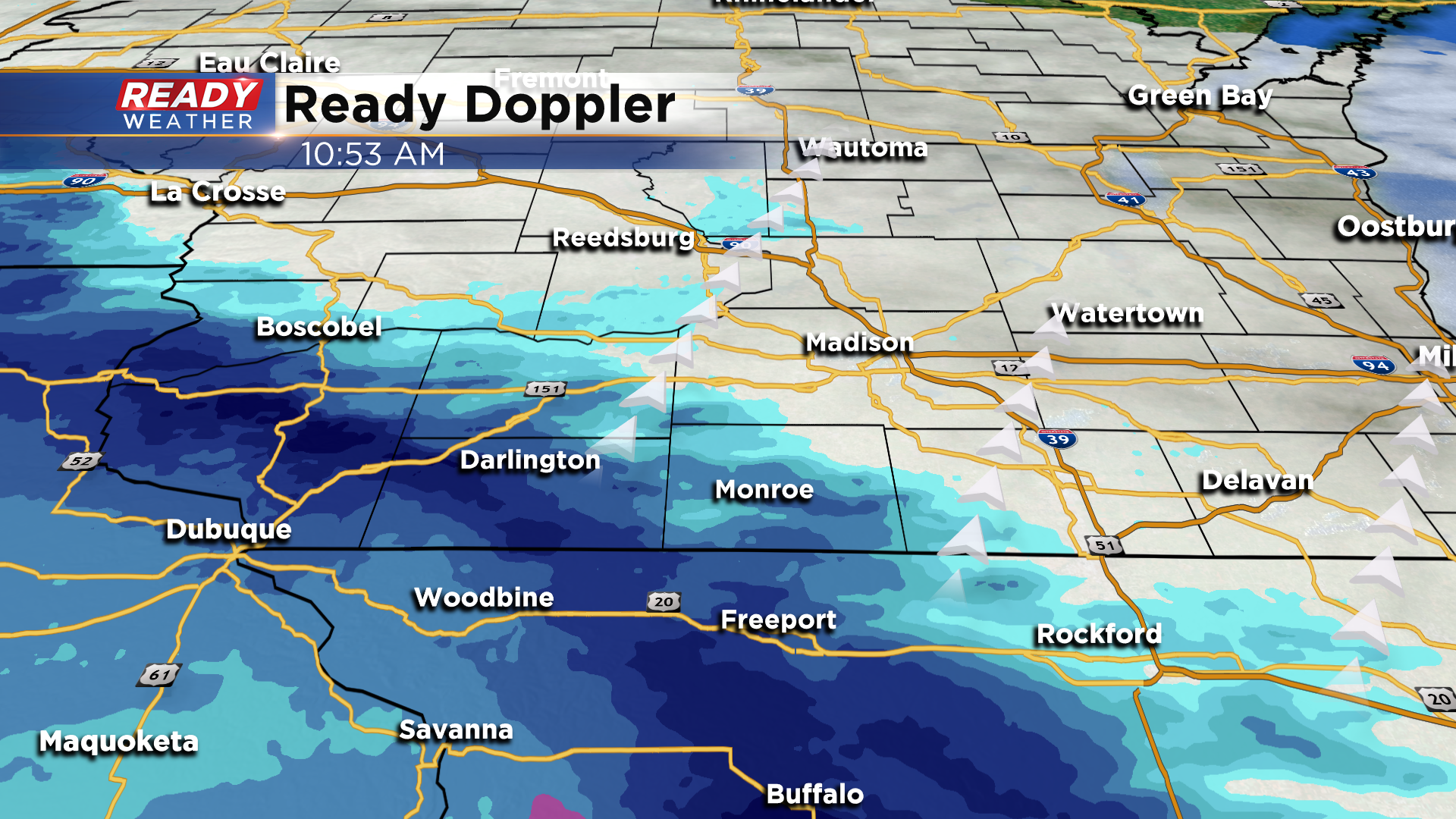 Snow is inching closer to southeast Wisconsin. Looking at Ready Doppler the movement of this band of mainly snow, with some sleet is slowly progressing north/northeast. The leading edge still is not reaching the ground as dry air continues to initially win out. Boscobel to Monroe is showing snow overhead, but latest reports are just cloudy and brisk. Moderate snow is being reported in Dubuque, with wind gusts that have hovered around 40 mph the last hour. We are also feeling the wind here with current east gusts near 30 mph. 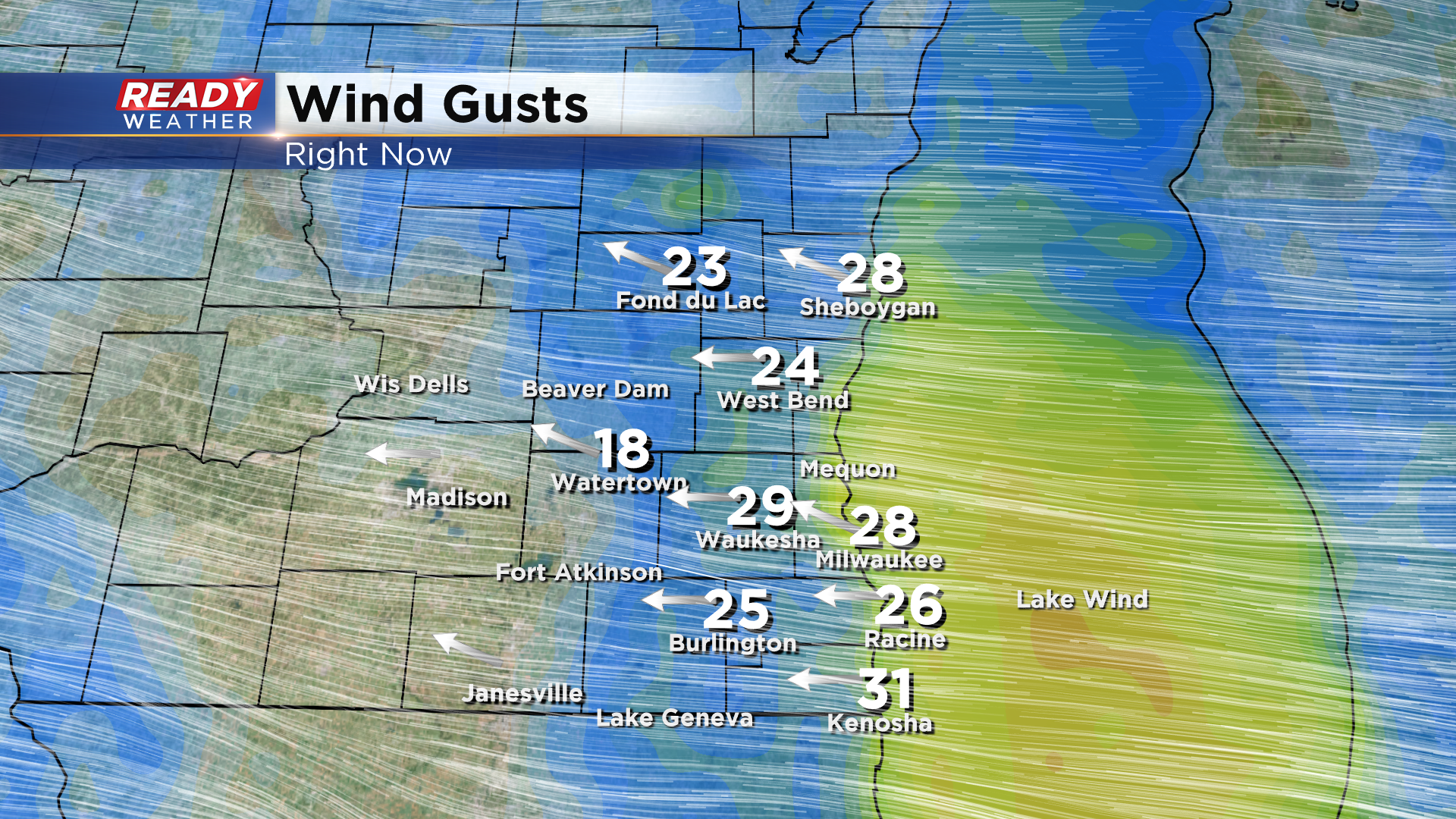 The snow on the radar and when you actually see it hitting the ground will lag by an hour or so. In fact, snow may not hit the metro until around 5pm, just in time for that evening commute. 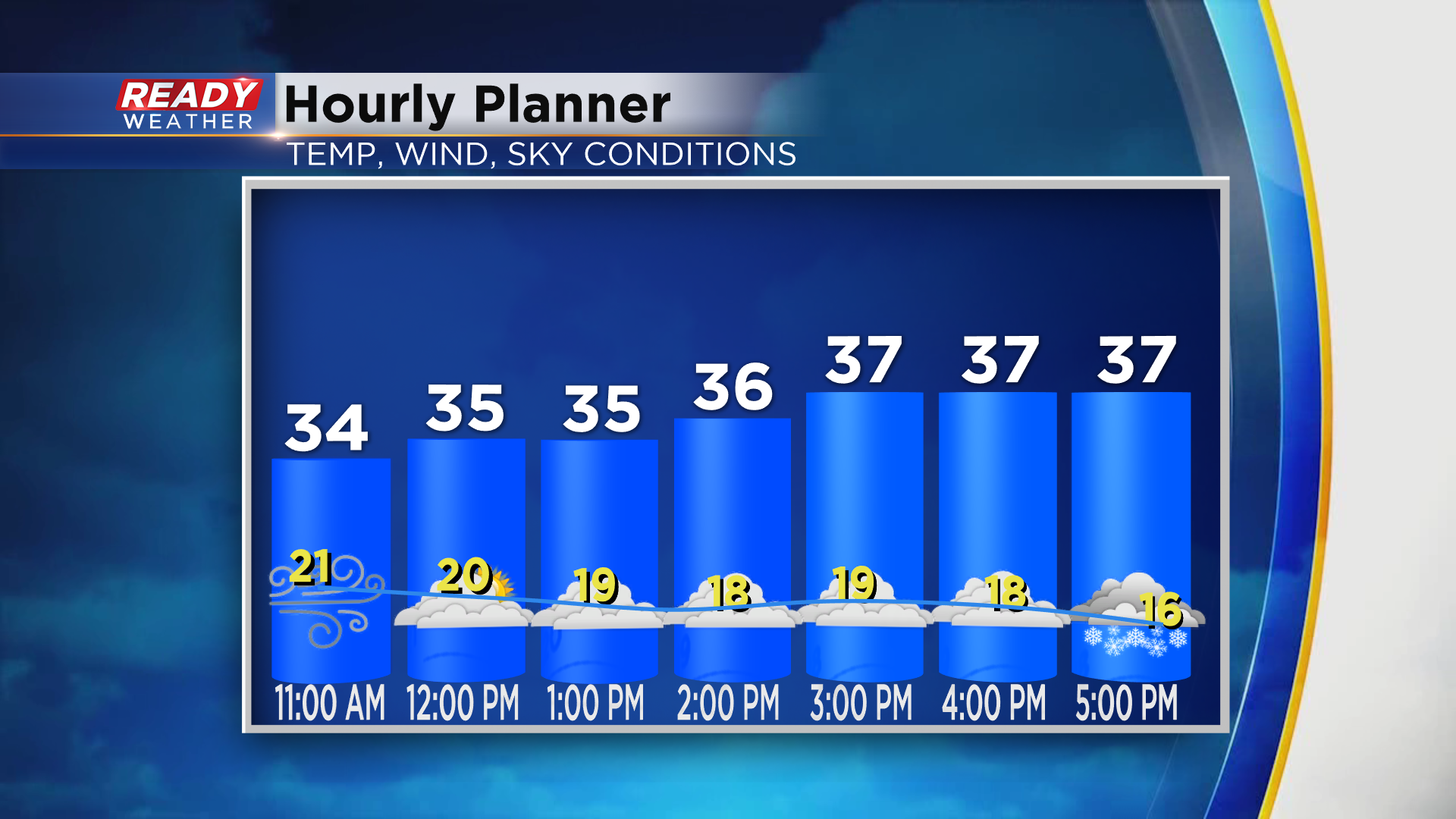 As snow closes in on the area keep in mind that with combined gusty winds off the lake, visibility will likely be one of the biggest travel troubles during the evening. We are still on track for a slushy accumulation of several inches.

The morning was dry and just fine and many woke up to a beautiful sunrise. The clouds have now swallowed up the sun and we don't see much of it the rest of the week. The evening commute will be a different story with at least wet and slushy roads expected for the early evening commute becoming snow covered and slipper by the late evening commute. 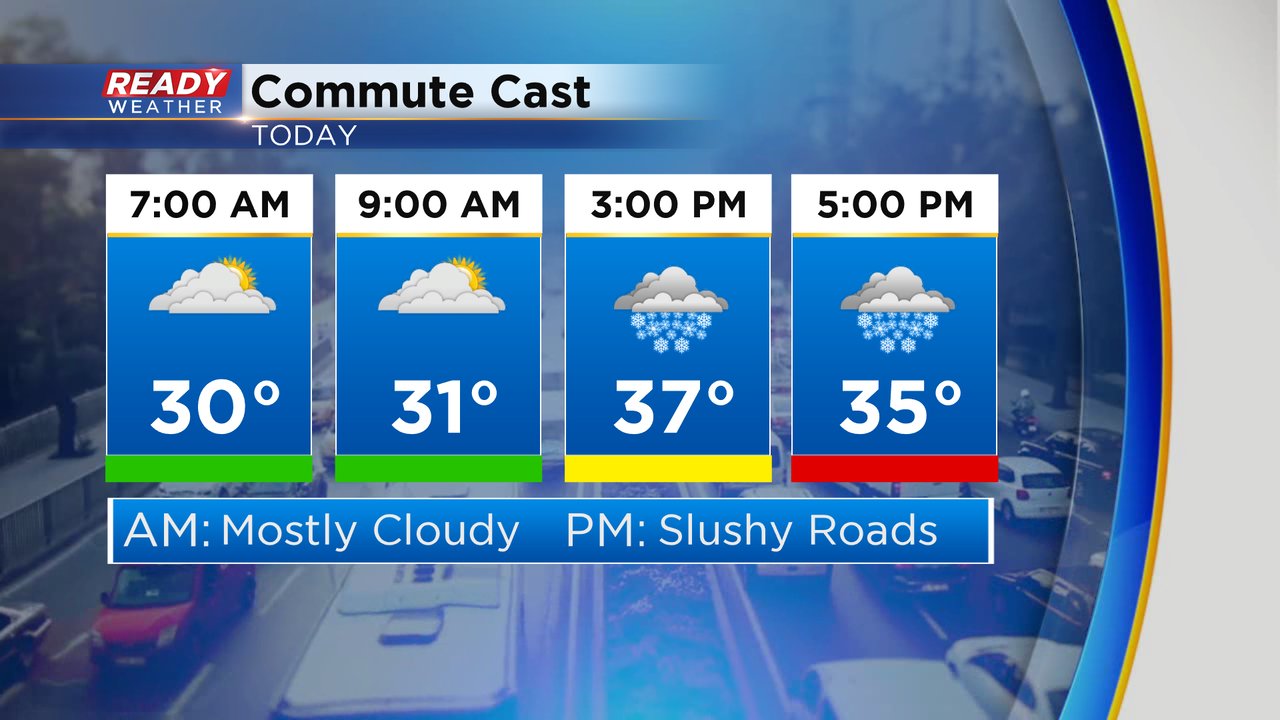 Currently snow is falling in southwest Wisconsin and NW Illinois but still has to overcome some dry air before it starts coming down in our local areas. Jefferson, Walworth, Racine and Kenosha Counties will be the first to see the snow start shortly after lunch time with most everyone seeing steady snow by the late afternoon. 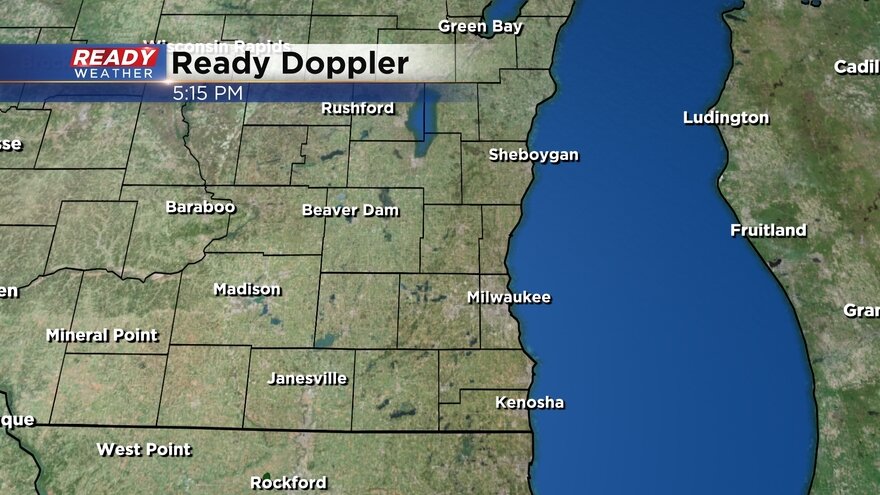 It's been over three weeks since we've had any measurable snow in southeast Wisconsin! Milwaukee has not had any precipitation (either rain or snow) in 20 days. But that all changes Monday with a large storm system moving across the country that brings some wet, slushy snow to southeast Wisconsin Monday afternoon and evening. The snow will start around 3 p.m. in our SW areas then move into the metro area for the evening commute and continue through the late evening. 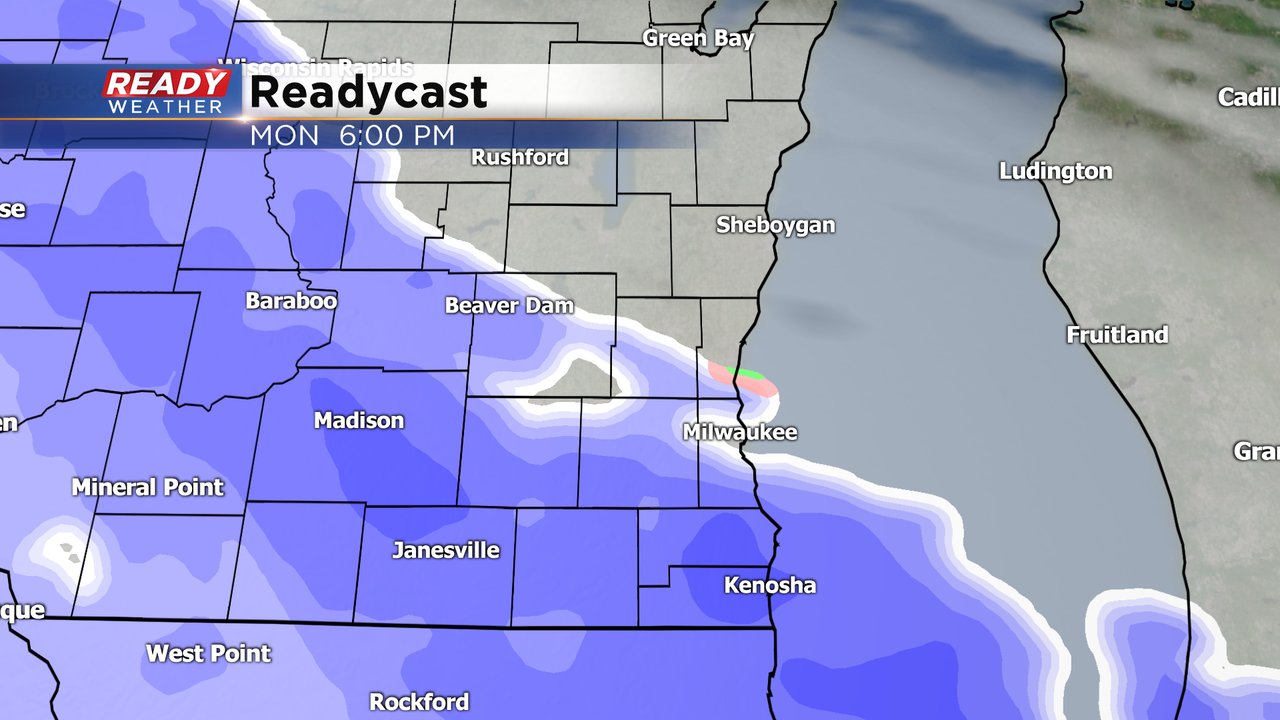 A few lingering snow showers will be possible through late tonight into tomorrow morning. A touch of wintry mix with some freezing drizzle may be possible once the bulk of the heavy snow is done. The snow will come down fairly heavy at times and roads will likely be slushy by the evening commute and slick and snow covered through the evening. The wind will be strong most of the day with gusts to 30 mph. 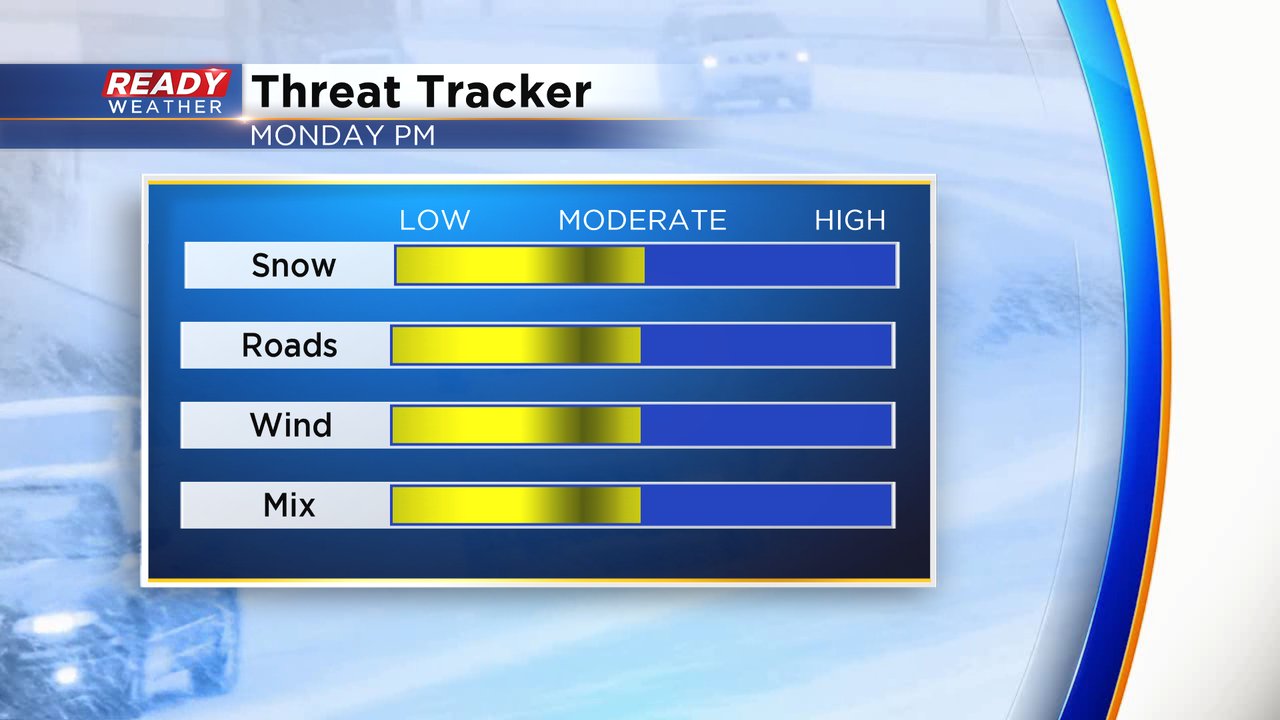 No winter weather advisories have been issued for southeast Wisconsin but one has been issued just to our west in south central and southwest Wisconsin from 10 a.m. Monday morning through 7 p.m. 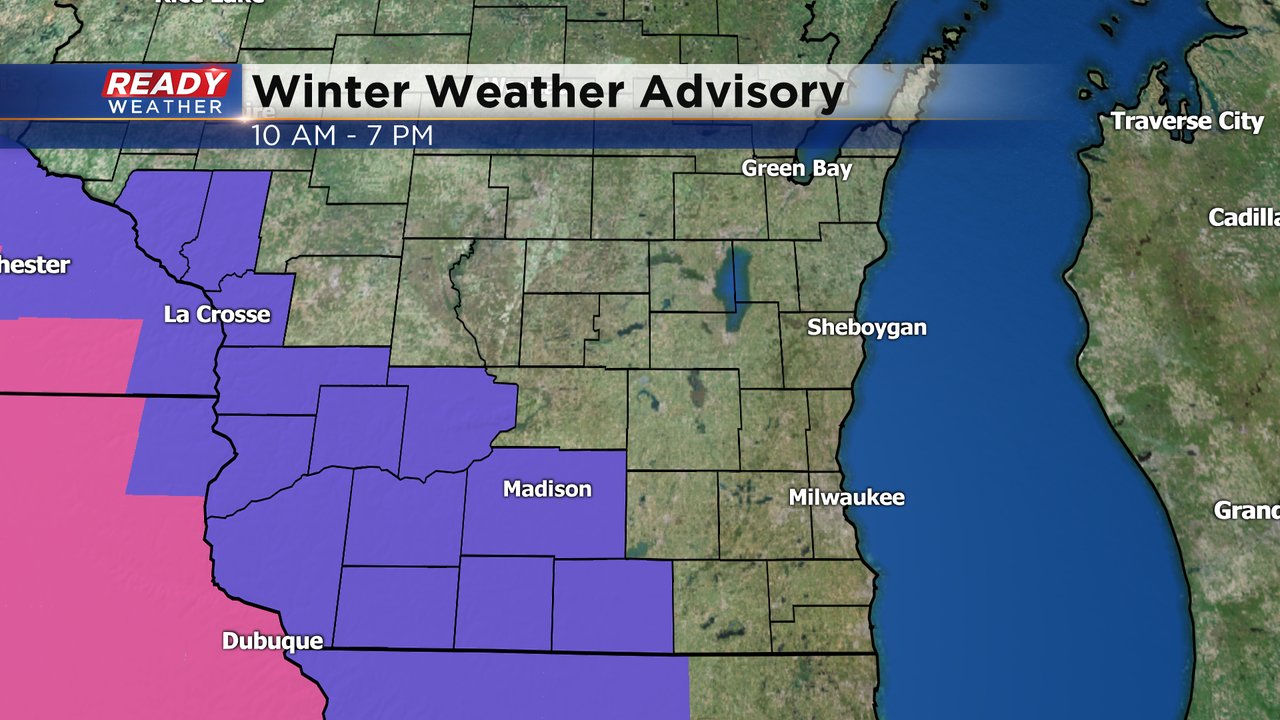 The snow will have to battle some dry air this morning which delays the start time when most of us will see flakes fly until the early afternoon. Some of the snow may melt, especially on the roads, when it first starts to fall. Accumulating snow will still be likely from late afternoon through the evening with 1-3" for most. A few spots may see just a touch more than 3". 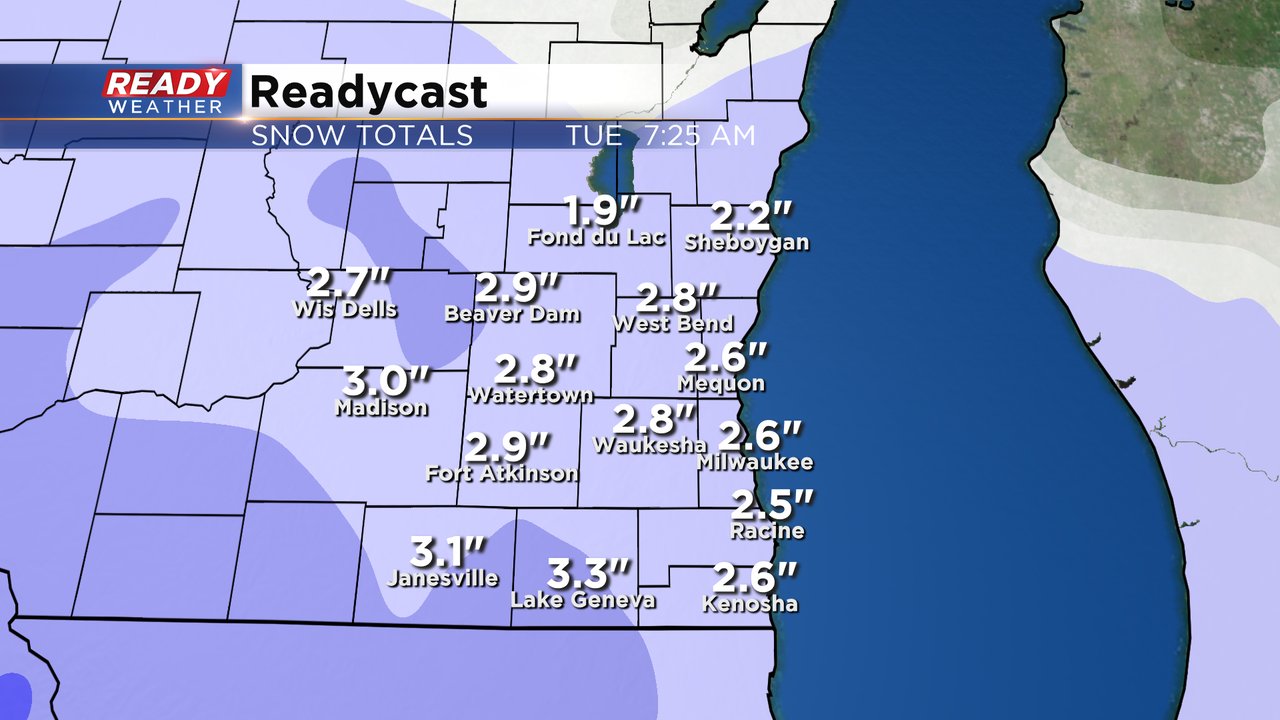