Winnie-the-Pooh Gets a New Friend 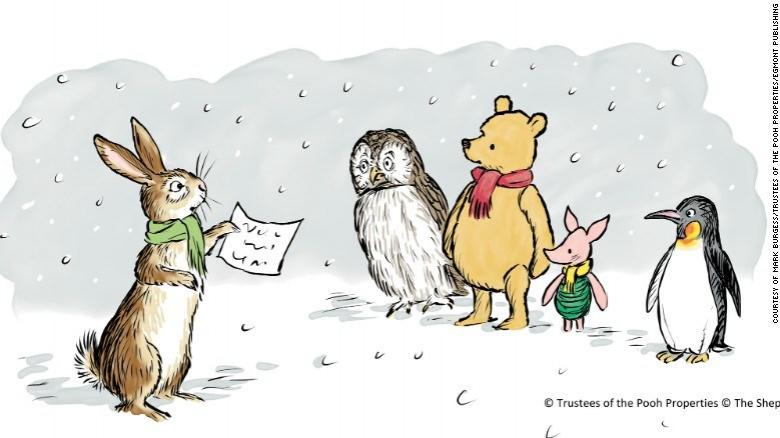 (CNN)Winnie-the-Pooh, the fictional teddy bear loved by children worldwide, is celebrating his 90th anniversary with a new feathery friend.

The character Penguin makes its first appearance in the book series' anniversary sequel, Winnie the Pooh: The Best Bear in All the World.
The new sequel released by Egmont Publishing -- which jointly owns the rights to Winnie-the-Pooh with Disney -- will include four new tales each set against a season throughout the year.
Pooh Bear's new friend is introduced to a new generation in Winter: In which Penguin arrives in the Forest, written by British author Brian Sibley. He drew inspiration for the character from an old photograph of the book's original creator, A.A. Milne, and his son playing with a penguin toy.
"While pondering what other toys Christopher Robin might have owned but which were never written about, I remembered seeing a photograph of father and son playing on the nursery floor with Winnie-the-Pooh and -- a penguin!" Sibley said in a statement.
"The thought of Pooh encountering a penguin seemed no more outlandish than his meeting a kangaroo and a tiger."
The beloved bear has been making friends since 1926, when the first story was published.
The sequel's illustrator, Mark Burgess, told CNN that the hardest part in designing Penguin was making sure the character resembled the stuffed toy from the old photograph.
"I had to try to combine a 'toy' look while also making the character look alive. It's quite a difficult balancing act."
He added: "I love the landscape of (the character's) adventures. I've always loved the natural world and I particularly relished depicting the Hundred Acre Wood (the imaginary forest where Pooh Bear lives) through the different seasons for this new book."
According to the illustrator, the success of Milne's original books continue to be popular today because the characters are so relatable.
"The stories and characters appear quite simple but there is a surprising amount of depth to the characters -- they are fully rounded. I think a large part of the attraction is we recognize the characters as like ourselves or our friends -- we all know someone who is grumpy like Eeyore or bouncy like Tigger," said Burgess.
Meanwhile British award-winning author Jeanne Willis, who wrote the new tale about spring in Pooh Bear's world, said A.A. Milne's series deserves to be celebrated because of its ageless appeal.
"It is not just children who read about Pooh Bear, a lot of adult's read the books for nostalgia. I have a friend that's just five years older than Winnie-the-Pooh that still loves reading about him," Willis told CNN.
"The innocence in the book is charming, and the characters show that it is okay to make mistakes and learn from them. It was because of Winnie-the-Pooh that I started writing. I thought that if a bear can write poetry, so can I."
Share this article: