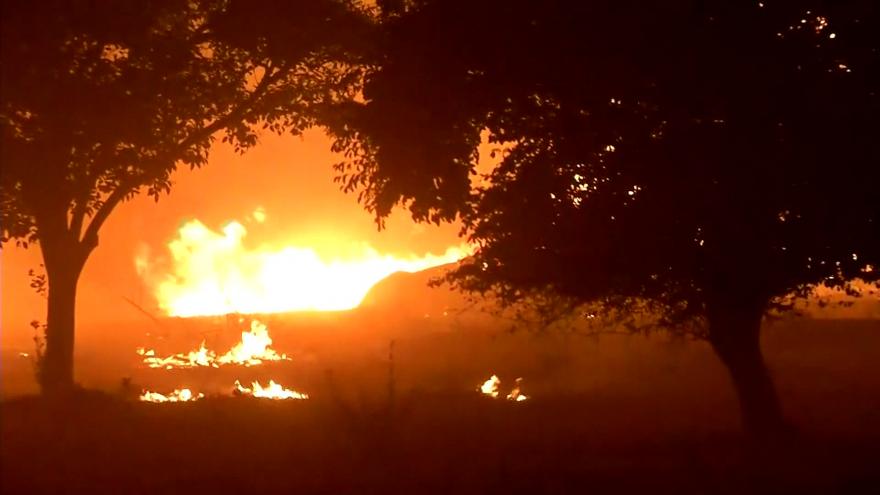 Mandatory evacuations were ordered in the wine country north of San Francisco Bay and elsewhere after blazes broke out late Sunday.

"It was an inferno like you've never seen before," said Marian Williams, who caravanned with neighbors through flames before dawn as one of the wildfires reached the vineyards and ridges at her small Sonoma County town of Kenwood.

Williams could feel the heat of her fire through the car as she fled.

With so many fires, residents of Sonoma County struggled to figure out what roads to take, finding downed trees or flames blocking some routes.

Fires also burned just to the east in the Napa County wine country as well as in Yuba, Butte and Nevada counties — all north of the state capital. Cal Fire tweeted that as many as 8,000 homes were threatened in Nevada County, which lies on the western slope of the Sierra Nevada.

Sonoma County resident John Dean was driving home early Monday when "I looked over and saw a house on fire" along the road. Soon he saw more houses engulfed in flames.

"I mean blazing, falling down on fire," he said.

Dean sped to his Kenwood home, alerted neighbors, and fled to the town of Sonoma. He was one of hundreds of evacuees who streamed into a 24-hour Safeway market overnight, while authorities set up an official evacuation center.

Maureen McGowan was house-sitting for a brother near Kenwood, and said both of the homes on his property were on fire when she left. At the Safeway, she pointed to her feet, still in slippers. She had fled so fast that she hadn't put on her shoes.

Belia Ramos, chairwoman of the Napa County Board of Supervisors, said officials did not yet have a count on how many properties were affected, either by the fire directly or by evacuations.

"We're focusing on making evacuations and trying to keep people safe. We are not prepared to start counting. Certainly with day just breaking now, we are starting to see the structures that are affected," she said shortly after sunrise.

"The gusts are very, very — they're tremendous and it's what makes this fire unpredictable. It's something that we're having to be very cautious about," she said.

Emergency lines were inundated with callers reporting smoke in the area, prompting officials to ask that the public "only use 911 if they see actual unattended flames, or are having another emergency."

The National Weather Service said widespread wind gusts between 35 mph and 50 mph were observed in the north San Francisco Bay region and isolated spots hit 70 mph. The winds were expected to subside at midday.

Community centers, the Sonoma County Fairgrounds and other local centers were opened for evacuees.