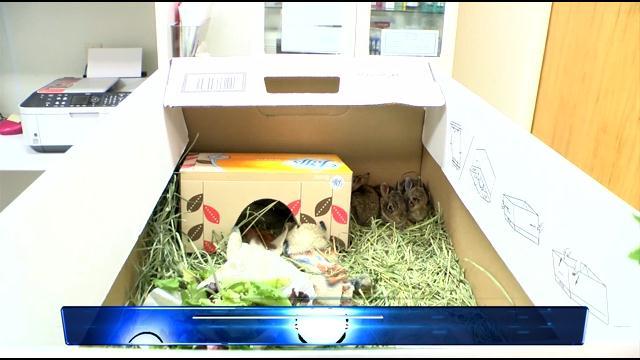 A Pleasant Prairie woman is in some hot water with the Department of Natural Resources after trying to sell seven live baby rabbits on Craigslist as food.

Seven baby bunnies almost sold for food on Craigslist have \"new lease on life\" thanks to the people at \"Fellow mortals.\"

\"The fact that people would think these beautiful little babies would be used as good for something else. I can't speak to what they were thinking,\" said Yvonne Wallace Blane, who is the director of rehabilitation at the wildlife facility, which is not a shelter.

Just eight days old the bunnies were being sold as food for snakes on Craigslist, that is until a DNR agent was alerted about the situation and brought them to \"Fellow mortals,\" a place that takes in wild birds and other non predatory mammals, to be rehabbed and released into the wild.

\"(They were) In pretty good shape but dehydrated and thin because they had missed an entire day of feeding. Tto put that into perspective that's like a human baby missing 12 days of feeding,\" said Wallace Blane.

Wallace Blane says the best thing to do if you see an animal in the wild that is possibly in distress, is to call a rehabilitator, who will provide all the proper care, especially feeding, for free.

\"You may not see results of improper feeding for weeks or months but it ends up being bones that are fragile or fur that falls out,\" said Wallace Blane.

She says they get no money from the government, they are a strictly privately funded service, and are always looking for donations.

All of the animals start by receiving care in the hospital but as their healing process grows they're then moved outside into cages and eventually back into the wild.

Everything is done so that it mimics the wild, in fact, there's very little talking even allowed inside the facility.

\"We don't pet these animals we don't interact with them anymore than necessary and to add to their experience and growing wild we have foster parents so they can imprint from their own species,\" she said.

Wallace Blane hopes the woman has learned a lesson.

\"He didn't give the woman a ticket because he said he didn't think she knew what she was doing,\" she said.

And is hopeful all seven bunnies will make a full recovery.

The staff at fellow mortals says if you find wildlife give them a call first. To make a donation, click here: http://fellowmortals.org/