What you Need to know for Sunday's Packers Pink Game 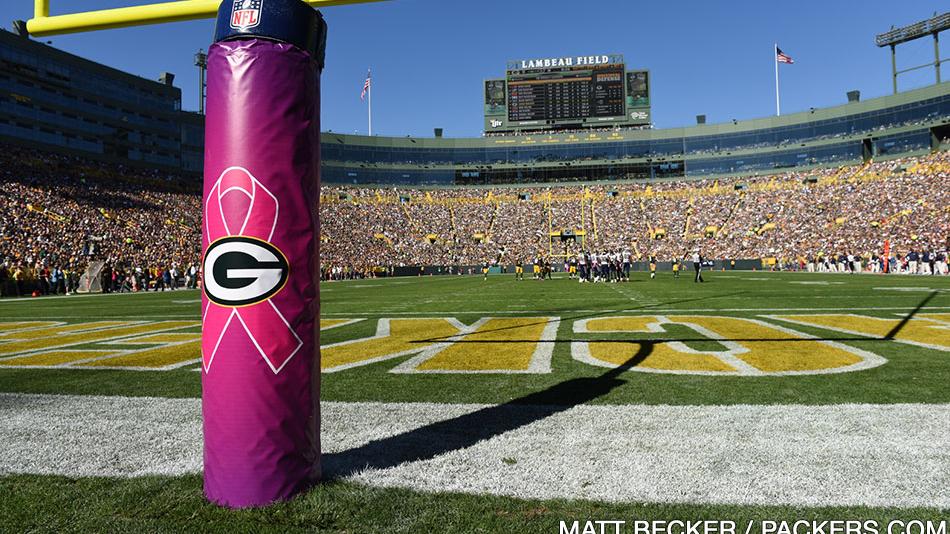 The Packers and Kohl's will recognize National Breast Cancer Awareness Month at Sunday night’s Packers-Giants game, with Lambeau Field and Packers players prominently featuring the color pink and several opportunities for fans to get involved in the breast cancer awareness effort.

Fans will receive pink Kohl’s rally towels when they enter the stadium. Cheerleaders will be using pink pompoms and TundraLine members will be sporting hats with pink ribbons. The field will feature pink ribbon stencils and pink goal post padding, with pink ribbons caps with for coaches, team personnel and officials. Players will use pink cleats, wristbands, gloves, sideline caps and towels. All game-worn apparel, along with special game balls, will be auctioned off at NFL.com/auction, with proceeds benefitting the American Cancer Society and team charities.

Prior to the game, the Zeta Tau Alpha Fraternity for women will be offering free pink ribbons and will join the American Cancer Society in offering #PackersVsCancer selfie cards along the fan walkway for fans to write the name of a family member or friend who has been affected by any kind of cancer and honor them by sharing a selfie with the card. Those not present at the game can visit http://packers.com/vscancer to download a card and share their support. The American Cancer Society will also have information about breast cancer, how to find it early and how to finish the fight.

In addition, Bellin Health will recognize 40 breast cancer survivors, inviting them to attend the game as honored guests and to be part of the on-field ambassador line, which welcomes players to the field. Also, the Bellin Health Mammography Bus, a pink RV that houses the Bellin Health Mobile Mammography unit, will be located along the fan walkway prior to the game. Fans can stop by to sign up to receive mammography reminders as well as participate in a photo opp.

The organization also is reminding game attendees to allow plenty of time to enter the stadium gates prior to the game and to enter at the gate listed on their tickets. Additionally, all fans entering Lambeau Field on gameday will use walk-through metal detectors, a league-wide mandate for use at all NFL stadium gates. The most efficient way through the detectors will be via express lanes at each gate for fans entering the stadium without any bags or stadium seats. Full gameday and safety policies are listed at http://www.packers.com/gameday/.

Prior to Sunday’s game, fans can also visit the NBC Sunday Night Football Bus, which offers the ultimate SNF experience with a mini control room that allows fans to direct and produce their own broadcast, grab a mic and act as special correspondent, and take photos near the PhotoBOMB wall.

Additionally, two featured alumni are scheduled to make appearances Sunday; Mark Chmura and Craig Hentrich will be taking part in fan activities at the Tundra Tailgate Zone and Legends Club, respectively, leading up to kickoff.

The pregame festivities will also honor Amelia Nicolas from Suamico, as the Shopko Kick-off Kid. Amelia is  being honored in the Shopko Kids Making a Difference program for raising funds to help endangered animals. Learn more at shopko.com/kickoffkid.

The national anthem will be performed by Madi Davis, a singer-songerwriter who was a Top 6 Semi-Finalist on NBC’s “The Voice.” During halftime, the High School Quarterback Challenge, presented by HPE and Camera Corner, will feature players from West De Pere High School and Menasha High School in an on-field competition.

All fans, even those without game tickets, can attend the premier gameday tailgate party in the Tundra Tailgate Zone in the Lambeau Field parking, featuring live bands, alumni autographs and food and beverages.

The Lambeau Field Atrium, including 1919 Kitchen & Tap, Packers Hall of Fame and Packers Pro Shop, will be open to ticketed guests only beginning at 11:00 AM, with exit/re-entry offered until 3:30 PM. The parking lots and TTZ will open at 3:30 PM, and stadium gates will open at 5:30 PM.

The Wisconsin Department of Transportation Northeast Region reminds motorists heading to Lambeau Field on Sunday night, October 9, for the Green Bay Packer/New York Giant football game that I-41 and adjacent roadways from WIS 29 north to Lineville Road in Brown County are under construction.

Sunday’s game may have impacts on traffic operations in Brown County. WisDOT encourages those traveling to the game to pre-plan their trip. Other tips include using alternate routes, adjusting your leave to ensure you reach the destination on time, and following the traveler information on the message boards.

I-41, WIS 172 and I-43 could experience backups near the stadium, as could the I-41 interchanges at Lombardi Avenue, Oneida Street, WIS 172 and I-43. Although numerous lanes in the I-41 Project, Brown County work zone have opened as construction nears full completion, orange barrels and narrow lanes in remaining construction areas could affect travel. Ashland Avenue through De Pere and Ashwaubenon will also experience increased traffic congestion as additional motorists use this as an alternate route. The heaviest congestion is expected three hours before and after the game.