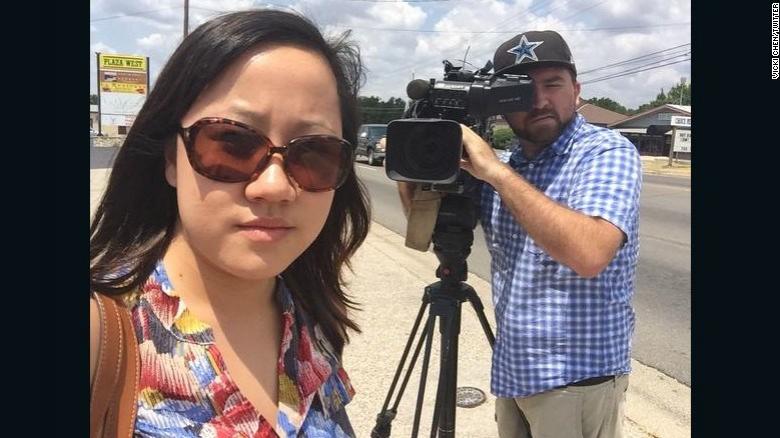 It was, perhaps, an unusual display of emotion for people typically trained to keep feelings to themselves.

In the hours after the slaying of the two WDBJ-TV journalists, anchors, reporters and entire newsrooms posted tributes and photos in solidarity with the fallen journalists. Vicki Chen, a 24-year-old investigative producer with KVUE in Austin, Texas, called on her colleagues to use the hashtag #WeStandWithWDBJ

\"When news people say we're a family -- we're not exaggerating. Everyone who works in TV is mourning,\" wrote Mark Meredith, a reporter for KDVR Fox 31 in Denver.

The Newseum in Washington shared a tribute from the museum.

Suri Crowe, a news reporter for WSET-TV ABC in Lynchburg, Virginia, wrote on her Facebook page, \"This is a devastating day for us in TV news. I knew Alison Parker and met Adam Ward. Alison was just a charming, sweet girl. I'm so very broken-hearted for their friends and families and my colleagues WDBJ7 this is not a story I wish to cover but I hope we can all honor their memories.\"

Colleagues commended the Roanoke station for its grace and composure as it continued to report on the deaths of its own.

\"Not sure how to keep working today, and I'm not in a newsroom. Hug your co-workers today, newsies -- they're your team, your family,\" tweeted Karna Bergstom, a digital content coordinator at the University of Minnesota-Rochester. Later, she wrote: \"I can't imagine putting together an obit piece on my co-workers.\"