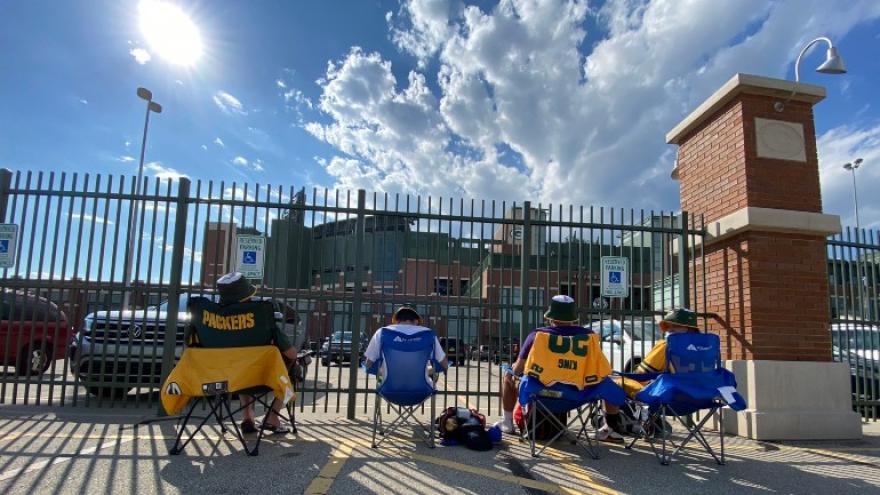 GREEN BAY, Wis. (CBS 58) - A Packers season unlike any we’ve ever seen kicked off in Green Bay Monday.

Players reported for training camp, but won’t start playing for the time being.

When players got to Lambeau Field, they went directly into a trailer set up outside, and then left.  Each player has to test negative for COVID-19 three times in the next four days in order to even enter the field.

He understands why fans are being kept away from players. “I guess if that’s what has to be done, then that’s what gets done,” said Sonkin.

“We came up here even though we didn’t know what would happen,” said Remy Matthews, who comes to training camp with his family every year.

This year, they expected very little.  “Maybe some autographs, maybe they’ll come up to us, we’re just hoping for the best,” said Matthews, who traveled from Sun Prairie.

“Just trying to look through the fence just to see if I can see a couple of guys right now,” said Preston Gusick, who has been to several training camps.

Once actual practices start, fans will be kept even further away, all in an effort to protect players as best they can.

While it’s put a damper on a usually fun start to the season, most fans understand.

“NBA's got the bubble, MLB just had a major outbreak with the Marlins right now, so I can see why they’re trying to be really safe with the NFL,” said Gusick.

“Everyone’s going to be sad, including me, but it’s for the safety of everyone, so yeah, I think they’re doing the right thing by doing it safely,” said Matthews.