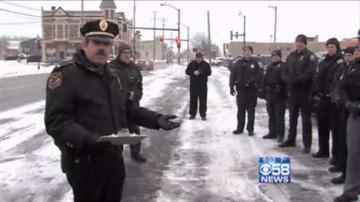 WAUKESHA-CBS 58 News was there as law enforcement gathered for a roll call Tuesday evening in Waukesha.

Officers and Deputies from several jurisdiction will be part of extra patrols looking for impaired drivers on one of the busiest party nights of the year.

The Southeast Wisconsin OWI Task Force was put together specifically for the holiday.

\"We just want to make sure that if they're going to drink,  that they're going to make responsible choices and don't get behind the wheel,\" Lt. Ken Pileggi of the Mukwonago Police Department tells CBS 58 News. \"223 people in 2012 lost their lives because somebody chose to be behind the wheel and drive. If we have one person that's one person too many. It devastates families and friends it's just terrible.\"

To illustrate the choices people have, the Task Force has a car that's painted half taxi cab and half State Patrol Squad Car.