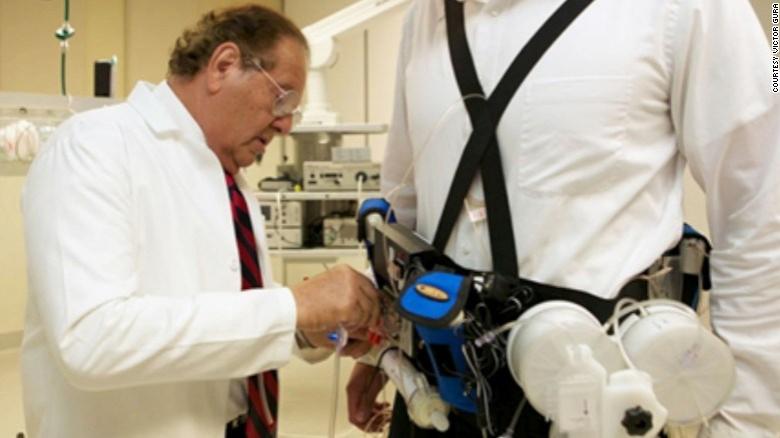 (CNN) A small, experimental wearable device has moved a step closer to helping patients who rely on kidney dialysis, according to a report.

For patients with kidney failure, the common treatment is to be hooked up to a dialysis machine at a hospital or clinic several times a week. In addition to the inconvenience, patients develop buildup of fluids and minerals between dialysis sessions, which can result in high blood pressure and breathing problems and require severe dietary restrictions.

"I was very frustrated -- I still am -- because for decades, we've been doing dialysis with big machines that prolong the life of the patient a little bit ... and in addition, they have a lousy quality of life," said Victor Gura, an associate clinical professor of medicine at the David Geffen School of Medicine at the University of California, Los Angeles.

Gura and his colleagues are developing the Wearable Artificial Kidney, or WAK, which would filter a patient's blood continuously, instead of a few times a week. "This is to reduce a lot of the complications that make patients sick ... (and) to give patients back their life," such as allowing them to have jobs again, he said.

The researchers presented the results of a small trial of the device on Saturday at Kidney Week, the annual meeting of the American Society of Nephrology. The trial involved seven patients in Seattle with end-stage kidney disease who wore the device for 24 hours. During that time, the device removed water and salts from the blood at the same rate as healthy kidneys, and patients did not complain of discomfort or experience side effects, Gura said.

The current research has not been published in a peer-reviewed journal and should be considered preliminary; however, Gura and his colleagues have previously published studies of patients wearing WAK devices for up to eight hours.

Participants in the current and previous trials were able to sleep with the devices, and should be able to take showers and carry out other normal activities, Gura said.

"We encouraged patients to eat bananas and mashed potatoes and drink orange juice, (and) they enjoyed ice cream and cheesecake, which they couldn't before," Gura said. Normally, these foods would be off-limits because they can lead to a dangerous buildup of potassium and phosphorus between dialysis sessions.

However, the device had one important pitfall: Two of the seven patients stopped wearing it before the 24 hours were up because it stopped working properly. Gura and his colleagues are working to correct technical problems before they start their next trial, which will probably involve a group of patients wearing the device for a week.

"Getting the machine to be reliable and consistent is going to be (Gura's) greatest challenge. ... I'll be convinced when they can keep patients stable for seven or 14 days," said Leslie Spry, medical director for the Dialysis Center of Lincoln in Lincoln, Nebraska, and spokeswoman for the National Kidney Foundation, a patient advocacy organization.

The WAK device weighs 10 pounds, though Gura and his colleagues are working to get it down to 5 pounds, and patients in the study wore them on their belts. The device connects to a large vein in the body via a catheter and, similar to a conventional dialysis machine, contains filters that separate water, salts and minerals out of the blood.

Users would have to remove the WAK from the catheter once a week to replace the filter and add chemicals once per day to purify the water that is filtered out. Other than those steps, the device would take care of itself, running on 9-volt batteries.

"Anytime you maintain a connection with a machine to your blood vessel system, infection is going to be your No. 1 enemy," Spry said, adding that he will be interested to see whether patients in longer-lasting trials develop infections. However, it would be "very possible" to teach patients to maintain their devices properly, just as those with home dialysis machines do, he added.

Home dialysis machines have alleviated some of the burden of treatment, allowing patients to receive dialysis up to seven days a week, Spry said. He has helped develop these machines and is a part-time employee of Nx Stage, which makes dialysis machines. However, these machines do not allow continuous dialysis, and patients use them for only up to eight hours a day (in the case of nocturnal machines), he added.

Although other wearable dialysis devices have been researched over the years, the WAK is the only one for which there are published clinical trials, Gura said.

If the researchers continue to receive funding to conduct clinical trials and further develop the technology, Gura estimates that WAK devices could be available for patients in two years.

The U.S. Food and Drug Administration announced last month that it would expedite the approval of the device once studies are able to demonstrate safety and efficacy.