‘We were told to duck and everyone started running:’ Witnesses describe chaotic shooting scene at Somers House Tavern

NOW: ‘We were told to duck and everyone started running:’ Witnesses describe chaotic shooting scene at Somers House Tavern

VILLAGE OF SOMERS, Wis. (CBS 58) – Candles remain lit outside The Somers House Tavern in Kenosha County on Monday, April 19 following a vigil for the victims.

These are remnants of a vigil after police say a gunman opened fire here overnight Sunday. Three men were killed, three others hurt.

Our coverage continues this morning on @CBS58. pic.twitter.com/FJtbirsKS7

VILLAGE OF SOMERS, Wis. (CBS 58) – A fight broke out at a loud, crowded tavern, then gun shots, screaming and running. Witnesses described a chaotic scene that played out in just moments at The Somers House Tavern in the early morning hours of April 18 and ended with three people killed and three others wounded.

The Kenosha County Sheriff’s Office said the shooting appeared to be targeted and there was no danger to the public. KCSO said they had located a person of interest who would be criminally charged with one count of 1st degree intentional homicide with more charges pending a further investigation.

Witnesses said a fight between two male patrons was eventually broken up. About 15 minutes later, the first gun shots were heard.

“We were told to duck and everyone started running,” Heidi Wittwer, who was inside the tavern at the time of the shooting, told reporters.

Wittwer and dozens of other patrons then ran in several directions away from the tavern which is located at 1548 N. Sheridan Rd. in the Village of Somers, just north of Carthage College.

Wittwer said she spent the morning contacting friends she saw were at the tavern to make sure they were safe. Hours later, she reflected on surviving a mass shooting.

“It’s horrible to think about being at a shooting at my college bar,” Wittwer said. “This is ridiculous, there shouldn’t be shootings at a college bar, I mean that’s horrible.”

The crime scene investigation was expansive, stretching from the tavern to across Sheridan Road into 15th Place. A significant portion of Sheridan Road was closed off from traffic for several hours. 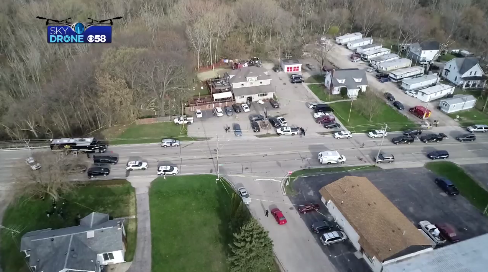 Peter Ploskee lives directly across from the Somers House and said the incident was unlike anything he’s ever seen in the neighborhood.

“Crazy. Crazy.” Ploskee said. “44 years I’ve been here and never had anything like this happen.”

Ploskee said he was in bed for the night for a few minutes when he heard a commotion.

“I hear a bunch of shots going on, get up out of my bed, run over to my window and I just see people from the bar running every direction,” Ploskee told reporters. “People yelling, screaming […] they were going this way, that way. I mean, any direction they could.”

Another woman who lives close by said it is not unusual for the noise from the tavern to be heard from a far distance, but she quickly realized this was not a normal instance.

The tavern is popular with students from Carthage College which is located about half a mile away. The college was put on lockdown for several hours following the shooting. For one student, the morning was spent in a frantic effort to make sure her friends were safe.

“It was definitely a panic moment,” Sidney Feenstra told CBS 58. “I went on Find My Friends on Snapchat to see where everyone was at. I started texting and calling all the people that I know that normally go there.”

Feenstra said she did not know any of the victims but said the shooting left an impact on her.

“It’s an overwhelming feeling, very scary, you definitely don’t think it’s ever going to happen to somewhere you go all the time, it makes you want to step back, reevaluate where you’re going and who you’re spending time with,” Feenstra said.