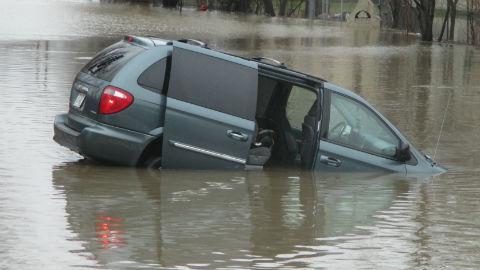 We Energies employee Steven Wesolowski helped rescue a family trapped in a mini-van by flood waters on Thursday, April 9th.

On that date, torrential downpours led to flash flooding in some areas. Wesolowski was returning to work when he came across a minivan in the flood waters near Kaul Avenue and Bobolink in Menomonee Falls.

When he approached the minivan he noticed there was a woman with three children inside.

\"I was concerned about that van... the way it was situated those children could've been trapped below that water level,\" said Wesolowski, who's been a We Energies employee for 30 years.

While Wesolowski called 911, another good samaritan went into the water to rescue the children. Then they placed the women and the children into the We Energies truck until emergency crews arrived.

Since the incident, the village has placed fiberglass with reflective markers to help guide drivers on that road, since it's above a creek and prone to flooding.

Wesolowski is glad to see the reflective markers but says regardless, the incident serves as an important reminder.

\"If you're not familiar with the street it's probably safer to not drive down there because you don't know if the road makes a bend or if there's a creek below,\" said Wesolowski.

Wesolowski doesn't know who the family is. He wasn't able to get their contact information in the midst of it all but he hopes to somehow reconnect with them and make sure they're doing okay.
Share this article: