'We did it:' Bucks players and fans bask in championship glory

’We did it: ’ Bucks players and fans bask in championship glory

MILWAUKEE (CBS 58) -- The reality of becoming a NBA champion is still sinking in for Giannis Antetokounmpo, at least that is what he told fans on Instagram Live on Wednesday, July 21 while in a drive-thru at the Brookfield Chick-fil-A.

The NBA Finals MVP's arrival at the restaurant surprised customers and staff who gathered around the star's car in hopes of getting a glimpse of him and grabbing a selfie.

Antetokounmpo also made a unique order that paid homage to his 50-point performance in the series-clinching Game 6 on Tuesday night.

"Can I have a 50 piece exactly. Not 51, not 49," Antetokounmpo said when ordering chicken nuggets.

It was a special moment for employees who thought it was just an ordinary day at work.

"They kept working but at the same time they were distracted, rightly so," Jared, the director of business at the Brookfield Chick-fil-A told CBS 58 in an interview. "And they tried to keep everyone moving through the line and grabbing photos as they could, as Giannis was like, yeah, that's okay, that's okay, obviously making sure he's okay with it first, but yeah they're still jazzed, still talking about it right now."

Fans who saw Antetokounmpo's livestream on Instagram rushed to the restaurant.

"I saw him on IG, I live on 97th and Hampton, I drove right over to try to get him to sign a jersey," Calvin Ewings said.

It's moments like the one at Chick-fil-A that make superfans like Jill Wiedmann and Christine Werginz appreciate the Greek Freak so much.

"Giannis has been such a great player and advocate for the city of Milwaukee," Wiedmann said.

The two have been season ticketholders for 42 years and witnessed the championship win in person. 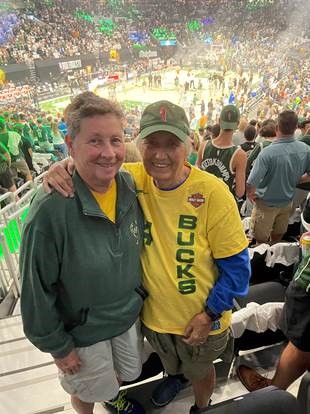 "I've never been so exhausted and so happy, crying after the game because we did it!" Wiedmann said.

Wiedmann said Thursday will be extra special for her because not only is she celebrating the Bucks championship at the parade and rally, but it's also her birthday.

At American Family Field, fans turned out to support another Milwaukee team, but with last night's win still in mind.

"Can't describe it, you know, the atmosphere, it was so incredibly loud, it was just so much fun to be there," Dan Glazer, who attended Game 6, told CBS 58.

With the Brewers in first place of the National League Central Division, fans are also looking ahead at the possibility of adding another championship for the city come the fall for the World Series.