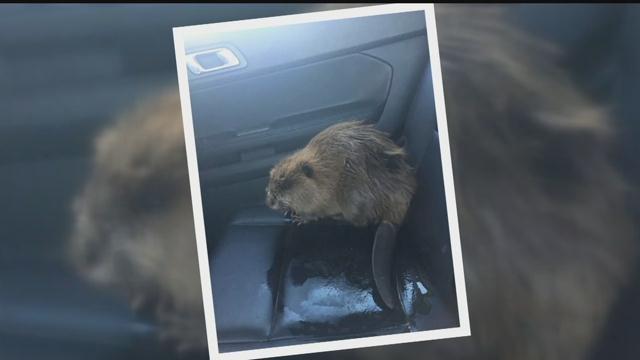 Caledonia police made an odd arrest this week. The suspects is listed as having brown hair, big buck teeth, and stands at about two feet tall.

On Wednesday Officer Andrew Gelden detained a beaver that was causing a scene in a village neighborhood.  Online, people from all over the place are sharing the story that's being called an animal rescue.

"The original call was - and the dispatcher kind of had a hard time telling me - it was there was a large beaver in the middle of the road and it wouldn't get out of the way," Gelden said, describing the start of the action.

Officer Gelden has been with the Caledonia Police Department less than a year. In that time he's done a lot, but wrangling a beaver near Johnson Park Drive was new one.

"My experience with beavers is pretty limited. I'm a big animal lover though," Gelden said.

"I just kind of tightened [the dog catcher pole] a little bit so it was snug around it and it just kind of walked, almost like a dog, straight to the squad car," Gelden said.

The pictures of the interaction - posted to Caledonia PD's Facebook page - might be why this story's spreading so far online.

"As I was driving I was checking on him, kind of looking back. We can kind of hear when ever anything's moving around behind us," Gelden said.

"When I dropped it off and it was by the water it was just kind of weird like, it just kind of stood up on its back two legs like the one picture and went kind of 'Thanks, thanks for the help'," Gelden said.

"I'm an animal person and like most people I feel like whenever we see something or someone in need it's just a human instinct that we should help than animal or help that person," Gelden said.

His fellow officers, however, are ribbing him pretty good for basically become 'the beaver guy'.

"This is, this is going to stick with me for the career," Gelden said.