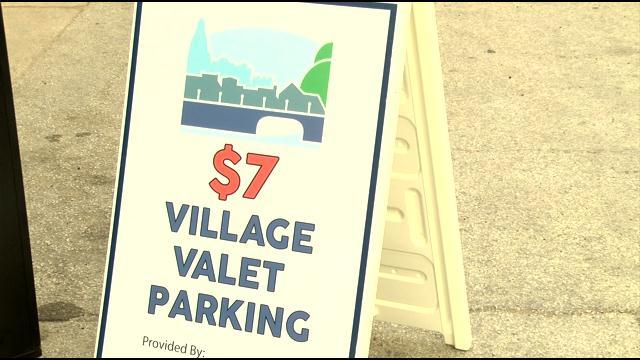 Whether you're pulling in or have to do it parallel, parking is premium on State Street in Wauwatosa.

\"It does get really crowed and considering its only an hour, it can be inconvenient,\" said Pauline Fisher from Burlington.

\"I knew that parking here is difficult,\" said Richard Gallun.

But this time around, the Milwaukee couple celebrating their 22nd anniversary used the Village Valet, paying $7 in exchange for frustration.That's the goal behind the new service, an idea created by businesses owners in the area.

\"None of the restaurants make money on valet,\" said Joe Bartolotta, Bartolotta restaurant owner. \"It all goes to the valet company and we did that because we wanted them to be compensated fairly.\"

Four spaces make up the loading zone at the corner of State St. and Harwood Ave. The valet is open seven days a week starting at 5 p.m., but one nearby property owner called it overkill.

\"It would perhaps be more logical to have limited valet parking because other nights it's not busy at all,\" said Russ Drover.

Drover fought to move the loading zone away from his property, but would still like to see the valet on both sides of the street.

It's been nearly two weeks into the months-long trial run and Bartolotta said interest in the service varies.

The goal is to park 40 cars a day. Some folks CBS 58 spoke with also said $7 is a little high for valet, but Bartolotta said that cost could go down if more people use the service.