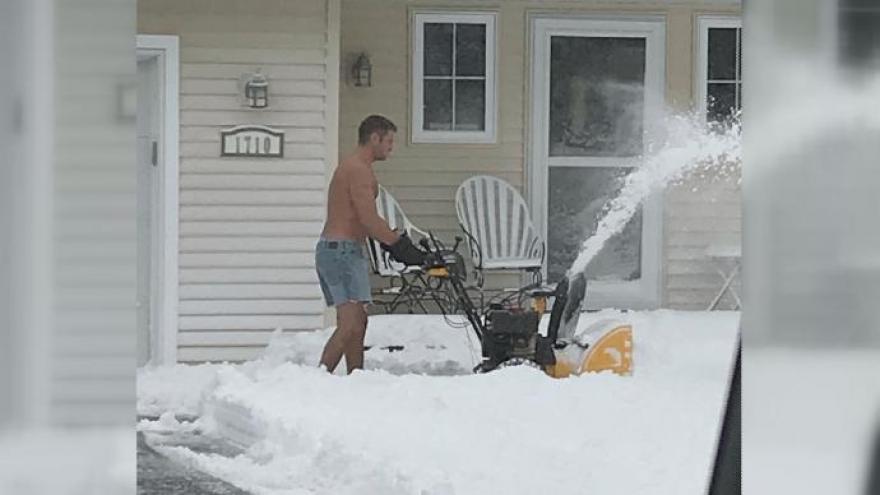 WAUSAU, Wis. (WSAW) -- Many people are bundling up during the spring storm. As the snow piles up, so do the layers, but one Wausau man is becoming famous for doing just the opposite.

Wausau Dad of four Patrick Schmidt is taking the internet by storm, snowstorm that is.

He’s the one pictured in jean shorts or “jorts” plowing his driveway.

Schmidt grabbed the shorts Saturday morning because they were the first pair of pants in sight.

"They were the only ones there, I went downstairs, had breakfast with the family and I knew that I could snow blow or I could go change and I was like ‘oh, it's only 27, so I can probably just do it with a pair of gloves and boots on’" Schmidt said.

So, how did the photo go viral? It’s all thanks to a sneaky neighbor.

"I saw the truck and I was like what is he doing? Then I knew he was taking my picture, but I had no idea this was all going to happen,” Schmidt said.

Schmidt’s family is close with the man who snapped the photo who says he was just following his wife’s orders.

"I was cooking breakfast looking out my window to see my neighbor shirtless in cutoff jean shorts,” Nicole Thomas said.

Once she was able to stop laughing, she sent her husband down the road in his truck to snap the photo as a joke. Nicole and Mark Thomas say they weren’t too surprised with the outfit since Schmidt is always playing pranks, but that this particular choice in clothing might be a winner.

"Can you out-do this? I don't know. We'll have to see what he comes up with I guess,” Nicole Thomas said.

While Schmidt might not be breaking out the “jorts” again this snowstorm, he’s glad he did.

"Nobody wants it to snow this much in April, but what are you going to do? It's here, we live here, no one forced us to be here so, may as well get out enjoy it, have a little fun with it,” Schmidt said.