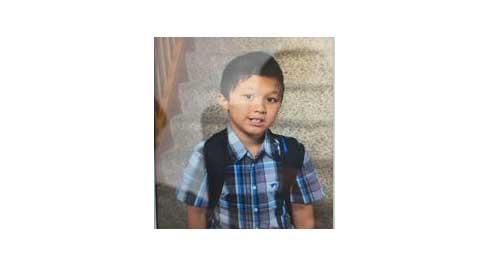 The 10-year-old Waukesha boy has been found safe.

Ounkham was missing for nearly 10 hours.

Ounkham has autism and is non-verbal.

Andrew was found cold and wet.

He was found in the marsh.

"I appreciate the outpouring of help," said Habanek.

ORIGINAL: Search crews are still looking for 10-year-old Andrew Ounkham. He went missing around 3:45 PM Sunday when he ran into a cornfield behind his house in Waukesha.

Ounkham's parents say, the boy has autism and is non-verbal. He was last seen wearing a blue shirt and grey shorts.

Concerned citizens and emergency officials have been searching for Ounkham since he went missing. They even searched overnight. So far, they've only found the boy's scooter.

Police say they've finished checking the cornfield behind Ounkham's house. Now they're looking in nearby neighborhoods. Investigators are also asking homeowners to help. They want them to check their yards and underneath their cars because children with autism sometimes like to hide in isolated areas.

CBS 58 reporter Kyle Aevermann estimates more than 300 volunteers joined the search efforts Monday morning. If you're interested in helping, go to Waukesha West High School and enter near the pool doors. That's where you'll get directions on where to search.

Waukesha police say volunteers need to wear sturdy shoes like boots because the area they're searching has rough terrain. Volunteers wearing sandals and flip flops are being turned away for safety reasons.

Search teams are using all kind of methods to find Ounkham. That includes K-9 officers from Milwaukee and Waukesha County and drones with thermal-imaging cameras. Police are also working with the Coast Guard and National Guard for additional resources.

The Salvation Army is giving food and water to search volunteers.

Police say, Ounkham's disappearance is not suspicious because this has happened in the past. They're not giving up hope that he'll be found.

If you see the boy, do not approach him. Police say, he may be scared and run away. Instead, call police immediately.