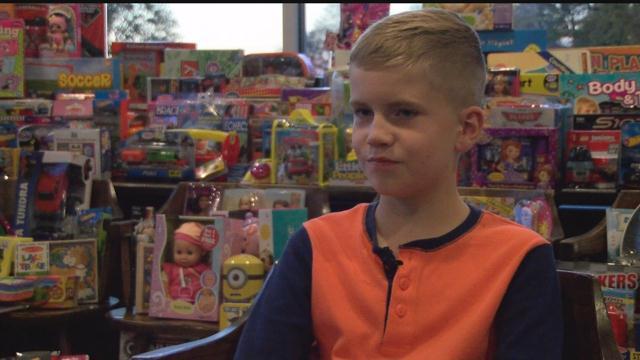 Its the second time he's gotten a scary diagnosis and the second time eight-year-old Vance Wilks has decided to give back to others instead of himself, while he fights to get his health back.

The tumor was in a dangerous spot, causing seizures and it needed to be removed immediately to save his life. But during his stay at Children's Hospital, Vance wasn't thinking about that; he was more worried about the sick kids around him.

Last year, Vance's doctor found a tumor the size of a golf ball on his brain.

"Vance was diagnosed with primary ganglioglioma on June 4th, 2014. We were admitted immediately to hospital," said his mother, Amanda Wilks.

Experiencing seizures and hallucinations, doctors said, the tumor on his brain was so big it would soon start effecting his personality and memory.
Mom Amanda says he stayed positive through the whole experience, with some help.

"I remember we were sitting in the room and the nurse brought this game in and he was so excited, attached to the wall though because he was having an EEG  done. As a mom, that made the biggest difference in my kids day," said Amanda.

As a teacher, Amanda was able to stay with her son all summer, but Vance noticed other kids weren't so lucky and were very lonely. So instead of worrying about himself, he spent his time at Children's  figuring out how to help these sick kids.

"Since I had the experience at the hospital, there wasn't much toys there so I wanted to get toys for the kids," Vance said.

"We thought, there were some people that don't have that army around them like we have so we thought this is cool, a toy could brighten a day," said Amanda.

Vance usually spends his summers hanging out at the Brown's Lake Golf Course, where his dad is the manager. So that's where his idea was born.

"Vance wanted to take money out of the cash register here at the golf course to buy the toys but my husband explained obviously that's not how it works," said Amanda.

Instead, coming up with a different way to get the community involved.

"We did a discounted rate of golf with a donation of a toy," she said.

With great results from 2014's toy drive, Vance was game to participate this year and found another reason to fight for his friends at Childen's.

"We found out at a routine MRI  that his tumor was back. So he said he really wanted to make it bigger," said Amanda.

As are the donations. With more than 650 toys and 1000 dollars in google play cards donated, Vance says, it feels good to know he's making a difference.

"How do you think this will make kids feel?"

The Wilks are estimating it will take at least three SUVS to get the toys to Children's but they're willing to take on more.
You can drop off donations at Brown's Lake Golf Course from  until Monday, the 16th at 3pm.

Here's a link to their page: https://www.facebook.com/Browns.Lake.GC/