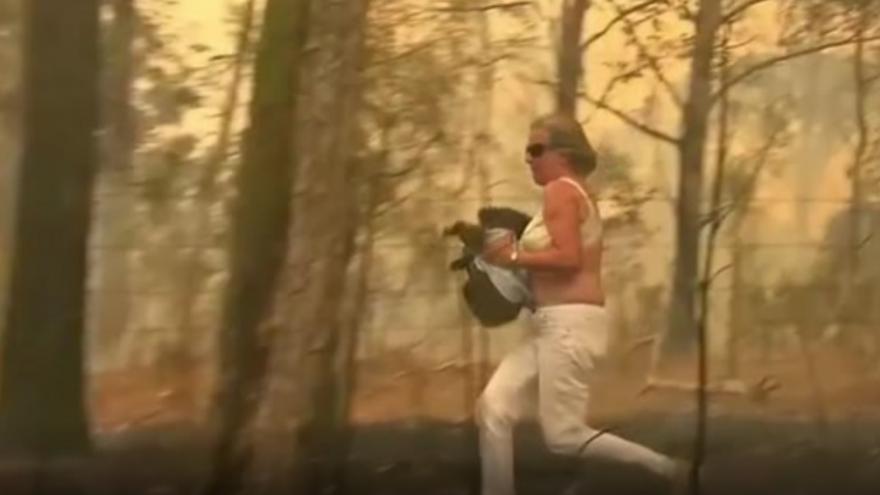 AUSTRALIA (CBS) -- A woman rescued a badly burnt and wailing koala from an Australian bushfire on Tuesday, Nov. 19.

The marsupial was spotted crossing a road amongst the flames near Long Flat in New South Wales (NSW).

A local woman, who told Australia's Nine News her name was Toni, rushed to the koala's aid, wrapping the animal in her shirt and a blanket and pouring water over it.

She said she would transport the injured koala to the nearby Port Macquarie Koala Hospital.

The country's koala populations have been a major victim of the flames, with more than 350 of the marsupials feared killed in a major habitat.

In Queensland, a Cattle Dog cross-breed named Bear, has been trained to find and save koalas injured in Australia's recent devastating bushfires. Bear is also able to locate quolls and other small Australian marsupials in the wild.

Bear has found dozens of koalas in need and for research purposes so far this year, but is yet to find any since starting his bushfire deployment earlier this month.

Population estimates for koalas, native to Australia, vary widely, from as few as 50,000 to little more than 100,000.

They dwell mostly in eucalypt forests in eastern states and on the coastal fringes, usually living up to 20 years, carrying their young in a pouch and sleeping for up to 18 hours a day.

Australia is prone to bushfires in its dry, hot summers, but fierce blazes have been sparked early, in the southern spring, by a long drought and soaring temperatures.

Bushfires have so far this month claimed at least four lives, burnt about 2.5 million acres (1 million hectares) of farmland and bush and destroyed more than 300 homes.

The current bushfire crisis has mostly been contained to the east coast of NSW and Queensland states, but officials in South Australia warned on Tuesday that forecast near-record temperatures raises the risks in that state.