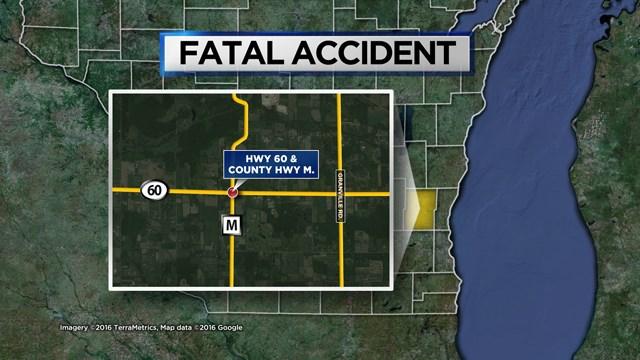 Washington County suffered its eighth traffic fatality Tuesday when a 60-year-old woman from the Town of Hartford was killed in a four vehicle accident on HWY 60 near CTH M in Town of Jackson.  According to a Washington County Sheriff’s Office news release, the woman, who had to be extricated from her vehicle, died while being transported to Froedtert Hospital by Flight for Life.

According to the Sheriff’s Office, the accident occurred around 2:30 PM.  The initial investigation found that the eastbound vehicle driven by a 21-year-old Jackson man crossed the centerline of HWY 60 as he attempted to pass two vehicles, lost control in the gravel and slide back into the westbound lane of traffic, colliding head-on with the vehicle driven by the victim.  The 21-year-old was reported to have sustained a significant injury as a result of the collision.

The victim’s car then collided with a parked vehicle and came to rest in the yard of a nearby home.

A fourth vehicle with two occupants swerved to avoid the crash and ended up in the ditch along side HWY 60.  This vehicle suffered minor damage and the occupants, a 16-year-old and a 17-year-old female from Jackson received only minor injuries.

Highway 60 in the area of the collision was closed to all traffic for about seven hours as the Washington County Sheriff’s Office Crash Reconstruction team investigated  the accident.