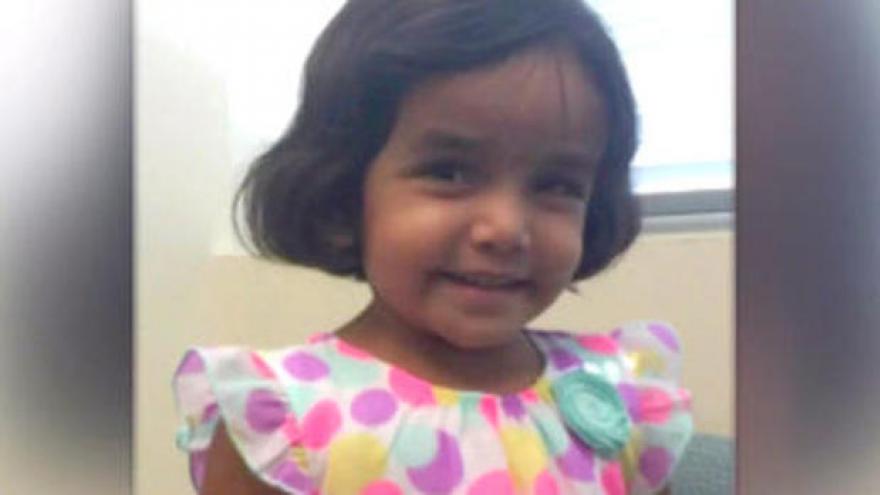 DALLAS -- The adoptive father of a missing 3-year-old North Texas girl has changed his story, saying she choked while drinking milk at 3 a.m. and that he took her body outside after he believed she had died.

Wesley Mathews, father of Sherin Mathews, presented his new story after going to the Richardson Police Department with his lawyer on Monday afternoon.

Richardson Police announced Tuesday that the body of a small child found Sunday morning in a culvert about half a mile from the Mathews' home is Sherin.

In his initial story given to investigators after the child vanished Oct. 7, Mathews said that he sent the girl outside as punishment for not drinking her milk, and when he returned about 15 minutes later, the child was gone. He reported her missing about five hours later.

The new version of events is detailed in Mathews' arrest warrant. He was arrested Monday and charged with felony injury to a child.

The warrant say Mathews told investigators after he was read his Miranda rights that he had been trying to get the child to drink her milk in the garage, but she wouldn't listen to him. Eventually, he said, the girl began to drink the milk. Mathews said he physically assisted the girl in drinking the milk, and that's when the child began to choke.

"She was coughing and her breathing slowed," the warrant says. "Eventually, Wesley Mathews no longer felt a pulse on the child and believed she had died."

He then admitted to removing the girl's body from the home, the warrant says.

Sherin was adopted from India last year. Previously, Mathews was free on bond after being charged with abandoning or endangering a child. According to police, Mathews said the girl was developmentally disabled and malnourished when he and his wife adopted her, and that they had to put her on a special diet that included feeding her whenever she was awake, including in the middle of the night, to help her gain weight.

Wesley Mathews initially told police that after doing an initial search, once he realized his daughter was missing, he went inside and did laundry while waiting for her to come home or for daylight so that he could continue looking.

He and his wife, Sini Mathews, attended a court hearing earlier Monday to determine whether they could regain custody of their 4-year-old biological daughter, who was placed in protective custody after her sister went missing. The judge postponed the hearing until Nov. 13 to give Wesley Mathews time to hire a civil attorney, said Marissa Gonzales, a spokeswoman for Child Protective Services. The girl will remain in foster care at least until that hearing or until a judge orders a change in custody.

"We do have the names of some relatives who have expressed interest in taking care of her," Gonzales said. "We can begin looking into those relatives, but it is entirely up to the judge where she is placed."

Authorities using dogs to search for Sherin found the remains Sunday in a drainage tunnel about a half-mile from the family's home.

Rafael De La Garza, an attorney for Wesley Mathews, told The Dallas Morning News after Monday's hearing that his client was "mourning the death of his child," but he didn't address the criminal charges. De La Garza did not immediately reply to a phone message from The Associated Press.

Investigators have asked neighbors and area businesses to check their video surveillance cameras for footage of a maroon Acura SUV owned by the Mathews family that they believe left the home between 4 a.m. and 5 a.m. on Oct. 7.

Kent Starr, an attorney for Sini Mathews, said that as part of Wesley Mathews' bond agreement, the couple cannot live together. Starr told The Dallas Morning News that his client is seeking to regain custody of her other daughter and that she has cooperated with the police in trying to help identify Sherin's body.

Officials from the Indian Embassy in the U.S. and the Indian Consulate in Houston tweeted late last week that they are in contact with police regarding the investigation and actively helping. Neither office has released a statement since the body was found. Police confirmed they are working with the consulate to obtain adoption records and other documents.

Police say the investigation is far from over, especially since the Dallas County Medical Examiner is still working to identify the child's body, reports CBS DFW.

"You might see additional arrests or even a modification of charges as we progress," said Perlich.

Wesley Mathews is being held on a $1 million bond, the station reports. He was booked into the Richardson City Jail Monday and is expected to be transferred to the Dallas County Jail sometime Tuesday.