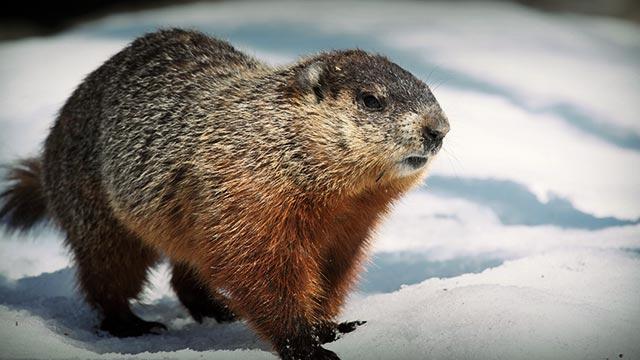 SUN PRAIRIE, Wis. (CBS NEWS) --When you think of Groundhog Day, you probably don't think of Sun Prairie, Wisconsin. But there's as much passion there as Punxsutawney, Pennsylvania.

They've got a wooden woodchuck in the town square. The local bakery sells groundhog cakes. In fact, the only thing they're missing is a real groundhog.

There used to be a Sun Prairie groundhog. You may remember him from last year when then-Mayor Jon Freund lent him his ear -- and he took it.

Shortly after chewing his way through the mayor's ear, the Sun Prairie groundhog chewed his way through a metal cage and escaped. Naturally, the town wanted a replacement woodchuck. And who wouldn't, if a woodchuck could be found -- which apparently is easier said than done.

She said they started celebrating in 1949 using groundhogs they caught, but now it's not so easy getting a live groundhog.

"It becomes very complicated," she said. "There's more than one type of license."

You need one from the state, one from the federal government, and if you can't find a certified groundhog breeder in your area, you need an import license.

The new mayor, a guy named Paul Esser, said it's hardly worth the effort -- and not just because of all the red tape, or because he's concerned about his own ears.

He said it's simply not humane to hold up groundhogs like we do. "I don't like that, no."

His proposal is to chuck the live woodchuck idea entirely. "Maybe we'll have somebody in a groundhog costume."

What about a gerbil? "He's domesticated, so I would not have [a problem with it]," said Esser.

Around Sun Prairie, the consensus is clear.

"February 2nd isn't Gerbil Day, it's Groundhog DayOne child said Sun Prairie would be doomed to winter forever with no groundhog. "It would just be winter from there on." And you were worried about climate change.

Fortunately, Gauger did find a loaner groundhog for next week's celebration, which gives her another whole year to find a permanent replacement.

And it gives the mayor time, too -- time to find a way to balance on his soapbox.," one resident said. Another said a groundhog is necessary "because that's the way it's always been and that's the way I like it."