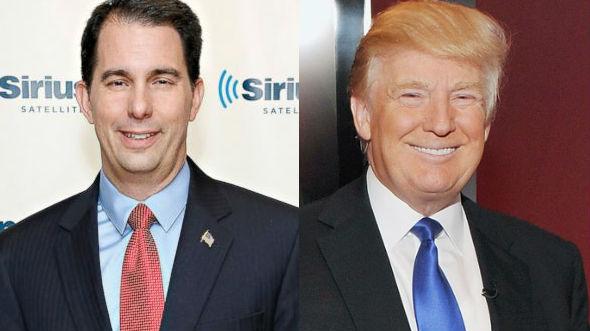 (CNN) Former 2016 presidential candidate and Wisconsin Gov. Scott Walker issued a sharp condemnation of Donald Trump's criticism of a federal judge on Wednesday -- even threatening to withhold his support from the presumptive GOP nominee.

Walker, who has yet to endorse Trump, told reporters: "We will watch and see what happens. There's still quite some time until he is the nominee."

"He's not yet the nominee. Officially that won't happen until the middle of July, that's the time frame. In particular, I want to make sure he renounces what he says with regards to this judge -- that flies directly in the face, and on the religious test alone, that's directly in conflict with the Sixth Amendment," Walker said in Madison, Wisconsin.

And the governor of Wisconsin -- one of the few states Trump lost during the Republican primary -- made clear that he strongly disagreed with Trump's criticism of Judge Gonzalo Curiel, who is overseeing the Trump University class-action lawsuit.

"I completely disavow what Trump said. To me, the idea that in America, any position out there -- we should be judged by the content of our character not based on race, not based on ethnicity, not based on religion -- those are founding tenants of this country as we approach July 4th," Walker said.

He expressed hope instead that Trump "would back off of those statements, that he would acknowledge that was wrong, and see what happens between now and the convention."