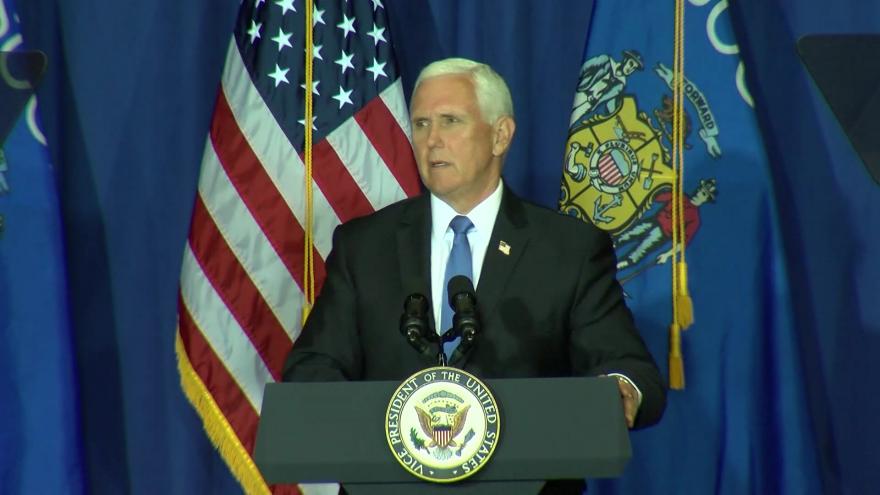 Janesville, Wis. (CBS 58) – A 50-day sprint to Election Day began with a visit to the Badger State for the Trump campaign, as it aims to energize its base in key battleground states.

Vice President Mike Pence made a stop in Janesville Monday, Sept. 14 where he spoke in front of a crowd of around 300 people inside a ballroom of a Holiday Inn Express. It was the VP’s second visit to the Badger State in the last seven days – he visited La Crosse on a White House Labor Day visit on Sept. 7.

“You said ‘yes’ to President Donald trump in 2016 and I know in 50 days Wisconsin’s going to say ‘yes’ to four more years,” Pence said. “The road to victory runs right through Wisconsin.”

Wisconsin is one of three ‘Blue Wall’ states Trump was able to flip from blue to red in 2016. The president won Wisconsin by fewer than 23,000 votes.

The Trump campaign is aiming to drum up support through highlighting divisive issues like policing and putting the spotlight on ‘law and order.’ That was evident in Pence’s visit as he began his remarks focusing on the shooting of Los Angeles Sheriff’s deputies over the weekend and connecting his message to unrest in Kenosha that was sparked by the shooting of Jacob Blake in August.

“The president and I will always support the right of Americans to peaceful protest,” Pence said. “But rioting and looting is not peaceful protest, burning businesses is not free speech, bringing violence against innocent civilians or those in law enforcement must stop and it must stop now.”

While the ‘law and order’ message riles up the base, it’s likely that issues around the country’s economic and health recovery from the pandemic may make the difference with independent voters. Pence and the Trump campaign are selling voters on the idea that the administration can recreate its pre-COVID-19 economic success in a second term.

“After losing 22 million jobs at the height of this pandemic, we’ve seen 10.6 million Americans already go back to work including 200,000 people right here in Wisconsin,” Pence said.

Congressman Bryan Steil, who introduced the vice president, endorses that idea, despite Wisconsin continuing to grapple with record-setting caseloads of COVID-19, months into the pandemic.

“I think that Americans know that we’re ultimately going to defeat this virus and who better to work to rebuild the American economy than president trump?” Steil told CBS 58 in an interview.

JANESVILLE, Wis. (CBS 58) -- A crowd of about 300 people packed into a ballroom at the Holiday Inn in Janesville Monday, Sept. 19, for a Make America Great Again" event hosted by Vice President Mike Pence. This is Pence's second visit to Wisconsin in just the last week.

During his speech, the VP aimed to energize supporters in a part of the state the Trump campaign is reliant on to deliver a win in Wisconsin.

Pence discusses Kenosha as well as Operation Legend in Milwaukee. The topic of "law and order" has been the primary focus for the Trump campaign as it tries to take the spotlight away from the ongoing pandemic.

JANESVILLE, Wis. (CBS 58) -- With Election Day 50 days away, Wisconsin remains a pivotal state in the race for the White House. Vice President Mike Pence is campaigning in Janesville Monday, Sept. 14.

The VP arrived on Air Force 2 around 10:15 a.m. Watch the livestream just below:

VP @Mike_Pence is set to speak here in Janesville shortly. It’s the first of three in-person campaign stops for the Trump campaign in Wisconsin this week.
Pence in Janesville today.@DonaldJTrumpJr in Rothschild on Tuesday@realDonaldTrump in Mosinee on Friday pic.twitter.com/hmt2CwiIBv

It begins on Monday, September 14 with Vice President Mike Pence traveling to Janesville. He is holding a 'Make America Great Again' event at the Holiday Inn Conference Center.

On Tuesday, September 15, Donald Trump Jr. will head to Rothschild to speak with supporters.

The week wraps up with President Trump stopping in Mosinee on Friday, September 18. He is holding a 'Great American Comeback' event at the Central Wisconsin Airport.

The Biden Campaign released the following statement to CBS 58 ahead of VP Pence's visit:

“President Trump admitted he intentionally downplayed the virus and misled the American people, and Wisconsin continues to pay the price -- in lost jobs, lost businesses, and lost lives. Even before the pandemic, Wisconsin manufacturers were struggling and farmers were weathering an erratic trade war. Today, many are barely hanging on.

It didn’t have to be this bad. Joe Biden has a plan to address the pandemic and build our economy back better. Instead of handing out massive tax breaks to giant corporations and the wealthy, he’ll invest in workers, support small businesses, and make the promise of ‘Made in America’ real by cracking down on offshoring and bringing back jobs to Wisconsin. And when Joe Biden is in the White House, Americans can rest assured that he’ll always tell the truth -- and that he’ll fight for Wisconsin families as hard as he fights for his own.”