Vote for your Favorite Bucks Bench Player and Get a Sub 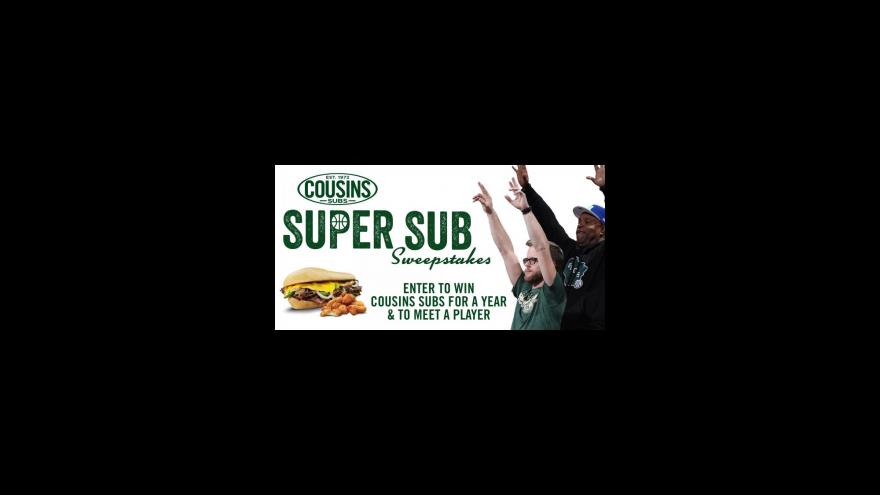 The Milwaukee Bucks and locally-based Cousins Subs announced the second year of the “Super Sub” promotion, which will give fans the opportunity to vote for their top Bucks performers off the bench. Strong play from reserves is key to any successful team, and the Bucks and Cousins are recognizing the Bucks subs who are contributing the most. From now until January 31, fans can log on to www.bucks.com/supersub to vote for the Cousins “Super Sub” they think is making the biggest impact on the team.

Every fan who votes will receive an exclusive Cousins Subs offer to use on their next online order and are automatically entered to win additional prizes. After voting ends on January 31, five runner-up winners will receive two tickets to the Bucks game on February 8 when they take on the Miami Heat, along with a $100 Cousins Subs gift card. One grand prize winner, also to be randomly selected from all eligible entries, will receive two lower-level tickets to the Bucks game on February 8, an exclusive “eat-and-greet” with the Bucks player voted as the Cousins “Super Sub”, and free Cousins Subs for a year.

Wisconsin-based Cousins Subs first joined the roster of Bucks corporate partners last season. A family-owned, fast casual sub shop established in 1972 by Bill Specht and his cousin, Cousins Subs is driven by the mission to Believe in Better – both in the quality of food it serves and in the communities it supports.

In addition to operating a stand on the concourse of the BMO Harris Bradley Center, Cousins and the Bucks have once again teamed up to “Block Out Hunger” statewide. In order to celebrate its upcoming 45th anniversary, Cousins has pledged to make a $45 donation to Hunger Task Force for every shot blocked by a Bucks player this season.