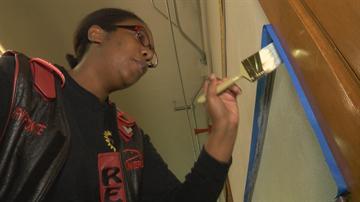 MILWAUKEE -- At 100-year-old Lincoln Avenue Elementary School on the city's south side, the floorboards squeak, the gym triples as a lunchroom and auditorium and the walls have seen better days.  But Saturday, volunteers made those walls look a little  younger.

\"This is kind of something I like to do on the side,\" Max Hand said.

\"I grew up in a pretty affluent neighborhood and, you know, I  never really had too many of the struggles that go on in this community,\" Hand said.

\"With an email, you have to put in all the email addresses and just try to get people involved,\" Hand said.  \"With social media you have such a wide set of users out there.\"

\"We always had to do fliers and go door-to-door and ask people, so it's a little easier now to just post it and it  will spread like wildfire,\" volunteer Sophie Brown said.

MPS paid for the paint.  But thanks to Hand's volunteers freeing up the manhours, thousands of dollars saved can go back into Sanchez's classrooms, where his staff teaches by example.

\"We join the troops at all times,\" Sanchez said with a paint roller in hand.  \"We want to be on the battlefield and it is important for [the students] to see me hanging  with them on the ground.\"

\"Hard thing to do to give something without getting something directly in return, but there's a lot of good people in this city and that's a good thing to know,\" Brown said.

The volunteers painted the hallway walls on Lincoln's first floor and basement levels during a six-hour shift Saturday.  Hand hopes to work on the outside of the school next.