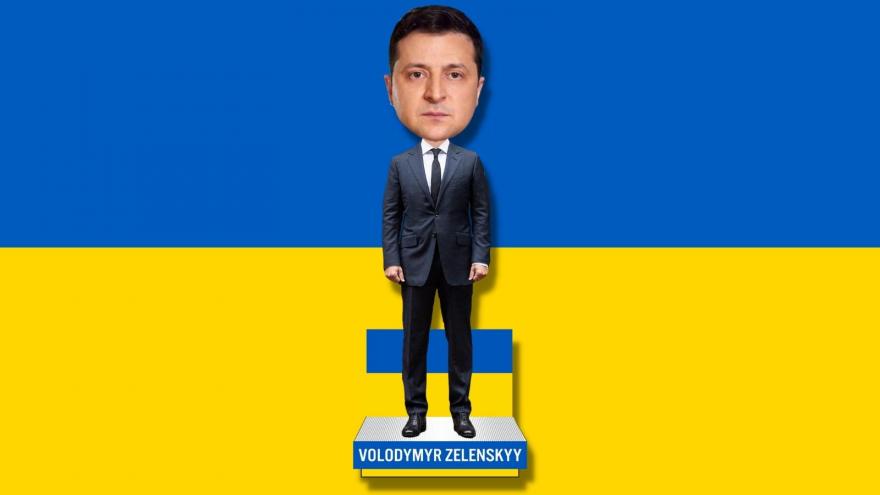 The museum says $5 from every bobblehead sold will go to GlobalGiving's Ukraine Crisis Relief Fund, supporting humanitarian assistance in impacted communities in Ukraine and in surrounding regions where refugees have fled.

We stand with Ukraine. We will be supporting the @GlobalGiving Ukraine Crisis Relief Fund & honoring President Zelenskyy through the sales of the first @ZelenskyyUa bobblehead. You can pre-order yours at https://t.co/OnLqMhQvog & $5 from every bobblehead sold will be donated. ?? pic.twitter.com/Ks7frUqxKd

The Zelenskyy bobblehead is dressed in a dark suit and blue tie, standing on a base bearing his name. The backing of the base features the blue and yellow national flag of Ukraine.

Each bobblehead will be individually numbered, and they are only available through the National Bobblehead Hall of Fame and Museum's online store.

The bobbleheads, which are expected to arrive in July, cost $30 each plus a flat-rate shipping charge of $8 per order.

"To show our support like countless others throughout the country and across the world, we are excited to release this bobblehead of Ukrainian President Volodymyr Zelenskyy to help raise funds and awareness for Ukraine,” National Bobblehead Hall of Fame and Museum co-founder and CEO Phil Sklar said.  “With the spotlight shining on him during Russia’s invasion of Ukraine, President Zelenskyy has become a worldwide hero, and we think he deserves to be honored with a bobblehead.”