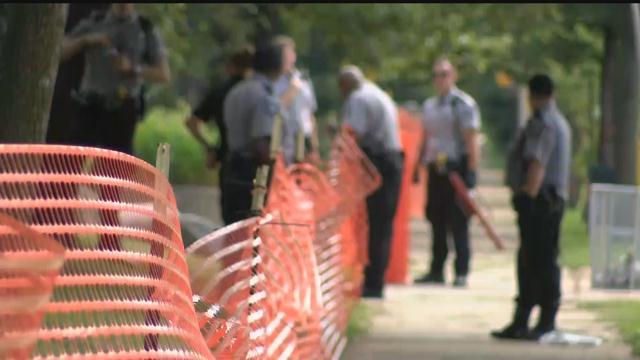 People visiting Sherman Park were allowed to stay in the area until 10 p.m. on Sunday. It was the first time in nearly a month that the park stayed open that late.

But it was the end of a confusing day for neighbors who were told one thing and then another about how late the park would be open.

Starting around 2 p.m., Milwaukee County Sheriff's deputies pounded rods around Sherman Park to hang the new fence - replacing the one taken down by county employees earlier in the day.

In the early afternoon visitors were told by deputies that by order of Milwaukee County Sheriff David Clark the closing time would remain 6 p.m.

The 6 p.m. closure is in line with what park hours were following unrest in the area following a nearby officer involved shooting.

In a statement Abele called the fences a literal and figurative barrier to healing in the Sherman Park neighborhood.

CBS 58 News received no official statement from Sheriff Clarke as to why he made his decision.

"It's definitely provocative," Reggie Moore, a neighbor in the Sherman Park neighborhood, said.

"And I think it will be a negative sight to see residents arrested for trying to reclaim a park in their neighborhood," Moore said.

As information on court proceedings about the fencing situation spread around a small barbeque - more than 30 kids played around the jungle gym.

Then came word from the sheriff through a surrogate just after 6 p.m.

"But you guys can stay in here and enjoy it for another half hour - he would like everybody out by 7," the deputy announced.

"So what's going to happen at 7 if people don't leave?" one person in a throng of people listening asked.

"We're going to ask you to leave," the deputy repeated.

"Now I want to ask you a question," another community member said. "Are you guys prepared at the behest of the sheriff himself to come in here and personally, physically remove small children out of the park?"

Vaun Mayes-Bey, founder of "We All We Got" which serves children in the Sherman Park neighborhood, said he thinks many people were willing to get arrested over the park hours disagreement.

"I think a lot of people were [ready]. that's unfortunate that people should prepare for arrest over a park," Mayes-Bey said.

Ultimately, tension would cool when the judge's decision came through. Neighbors even pleaded with deputies to roast a marshmallow and make peace.

Mayes-Bey said he was unmoved.

"It's pr. It's a photo op. So I know that even if they roasted that marshmallow and he called them back and said kick 'em out now - he changed his mind - they will still do it," Mayes-Bey said.

"So that photo op, that roasting a marshmallow with us for that second, didn't mean anything if that happened, you know what I'm saying?" Mayes-Bey said.

Some visitors to Sherman Park said they sympathized with deputies deployed to the area because they felt the authorities were being used a political pawns.

As of 10 p.m. no arrest or problems with law enforcement had been reported in the park.