MILWAUKEE (CBS 58) -- A Milwaukee Brewers fan just had his life saved and it's all because he put on a special shirt and wore it to a game.

Lenny Zweig, a 43-year-old father of 3, needed a kidney transplant. He suffers from IgA Nueropathy, a disease that ruined his kidney function, after contracting Dengue Fever from a mosquito in Africa, years ago.

He put his message on a shirt and wore it to a Brewers game last spring. "It says 'Share Your Spare' on the front with a picture of a kidney, and on the back it says, father of three needs a kidney, blood type O."

Sitting a couple rows behind him at the game was 22-year-old Payton Coron. She was intrigued by the shirt, took a photo and posted it on Snapchat and Facebook. “Even getting one share was enough for me to get the word out, but then it became hundreds and a lot of likes, a lot of shares. It blew up,” she said. 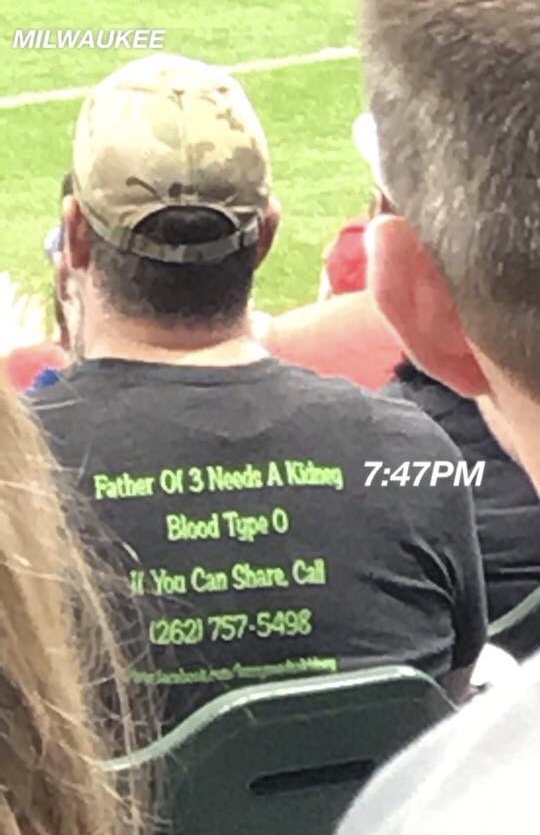 The post led to Lenny finding a kidney donor. A woman who happened to see the viral post but wasn’t his match, entered them into the National Kidney Registry. The database pairs people who aren’t matches with others in need of a transplant.

On Thursday, he finally got the call he had been waiting for.

For his family and wife Becky Roberts, it's a sense of relief.  “We have not stopped smiling and trying to take in every minute of it since, I have to keep saying it out loud for it to be real, he’s actually getting a transplant. We waited for this for so long.”

A new kidney means he'll no longer have to miss out on family fun.

"It will be so nice to get out of my dialysis chair and start being able to spend time with my kids...band concerts, baseball games. I missed so many of them," he said.

Lenny is scheduled to get a transplant on November 2. He doesn't know the donor, but said he's grateful for their gift of life.